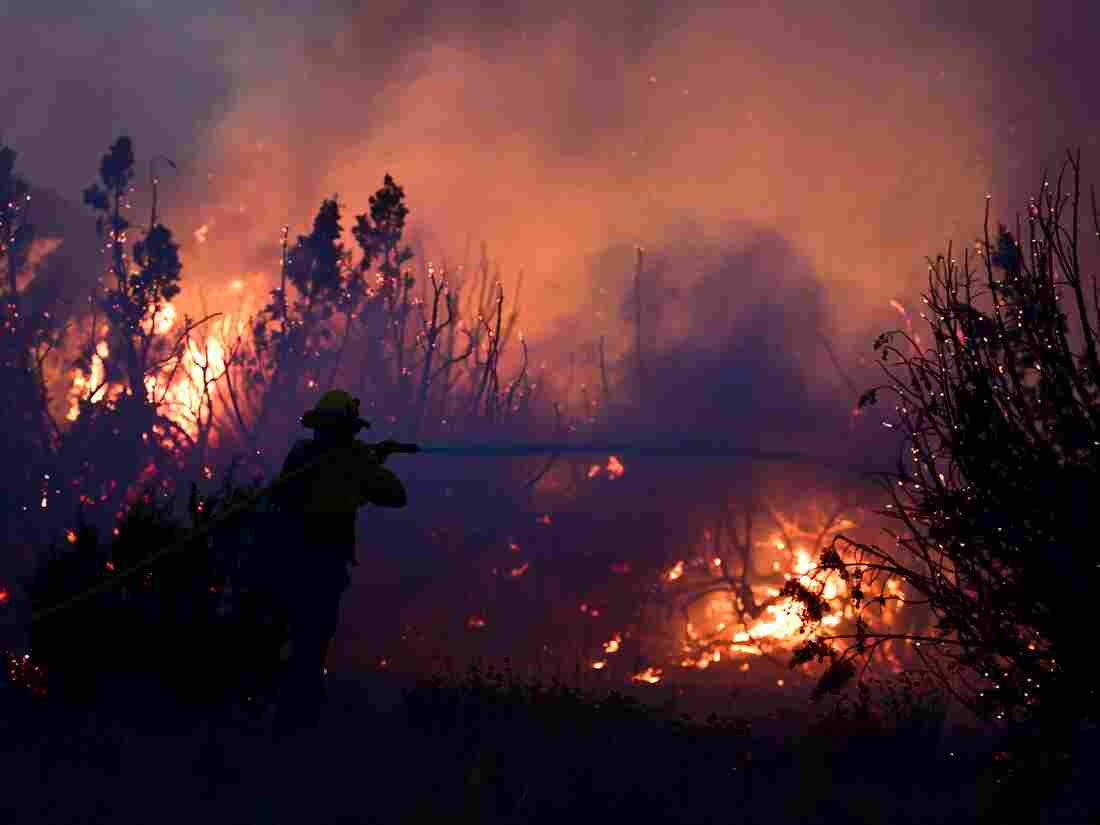 A firefighter works to put out flames of the Bobcat Fire in Juniper Hills, Calif. As of Sunday, the wildfire has grown to more than 99,000 acres and is 15% contained. Frederic J. Brown/AFP via Getty Images hide caption

As firefighters work to contain dozens of wildfires raging across California and other western states, the Bobcat Fire is approaching nearly 100,000 acres, making it one of Los Angeles County’s largest-ever blazes.

The U.S. Forest Service says the Bobcat Fire has burned 99,428 acres and is 15% contained as of Sunday, two weeks after it first ignited. More than 1,600 emergency personnel are responding to the blaze, which has prompted a host of evacuation orders.

According to CAL Fire, some 19,000 firefighters are currently battling 27 major wildfires across the state.

“California historically experiences some of the most devastating wildfires in the months of September and October,” Cal Fire said in its update. “Do not let your guard down!”

This wildfire season is proving particularly destructive, having sparked five of the largest blazes in California’s history.

More than total 7,900 wildfires have burned over 3.5 million acres of land in California this year. Fires have killed 26 people and destroyed more than 6,100 structures since mid-August. More recently, a firefighter was killed in the El Dorado Fire in San Bernardino County on Thursday.

Officials at the Angeles National Forest, where the Bobcat Fire originated, said in a tweet on Sunday that “active fire behavior” continues near the San Gabriel Wilderness Area.

The San Gabriel Mountains include Mount Wilson, where an observatory by the same name houses some of the most historically important telescopes in the world. The fire came within 500 feet of the observatory last week before crews fended it off.

Forest Service officials said that responders took steps to secure the area around Mt. Wilson on Saturday night, and are looking for ways to secure the line between the mountain and the nearby highway before weather conditions worsen.

According to the Bureau of Land Management, roughly 85% of the country’s wildland firefighters are working in California, Oregon and Washington.

In Oregon, the state’s forestry department officials said on Sunday they are “closely monitoring” 10 major wildfires, down from 17.

Here’s a quick rundown of major fires burning in Oregon. Our Wildfire Blog has daily updates from all of these fires. https://t.co/nujAtltmMo pic.twitter.com/Nm3XlXU8Cc

Officials said roughly 1 million acres have burned in Oregon since the start of the year, nearly double the 10-year average.

A recent turn toward rainy weather has helped with containment efforts in Oregon.

Doug Grafe, the chief of fire protection at the Oregon Department of Forestry, said in a Saturday video briefing that weekend rain, cooler temperatures during the day and decent humidity at night make for “favorable fire-fighting conditions,” and a potential storm front this coming week could provide additional relief.

“Overall, a very good spot for us to be in and folks are making great progress statewide,” Grafe said.

The National Interagency Fire Center said on Sunday that no new or contained large fires were reported across the country, and firefighters “continue to make headway towards their suppression goals.”

Its latest data show 22 large wildfires burning in California, 14 in Idaho, 12 in Oregon and eight in Washington, as well as several each in Colorado, Montana, Utah and Wyoming.

South Carolina primary: The biggest myth about the ‘black vote’

Florida has ‘all the markings’ to become next coronavirus epicenter: model

‘Go Back To Your Bunker,’ Seattle Mayor Tells Trump In Spat Over Protests