Skip to content
You are here
Home > Financial > Shootings And Gun Deaths Continue To Rise At Alarming Rate In Large U.S. Cities

Many large U.S. cities, including New York, Philadelphia and Chicago, have been plagued by a recent surge in shootings and subsequent fatalities, escalating the debate over gun violence, which has disproportionately impacted communities crippled by the coronavirus pandemic and ensuing recession. 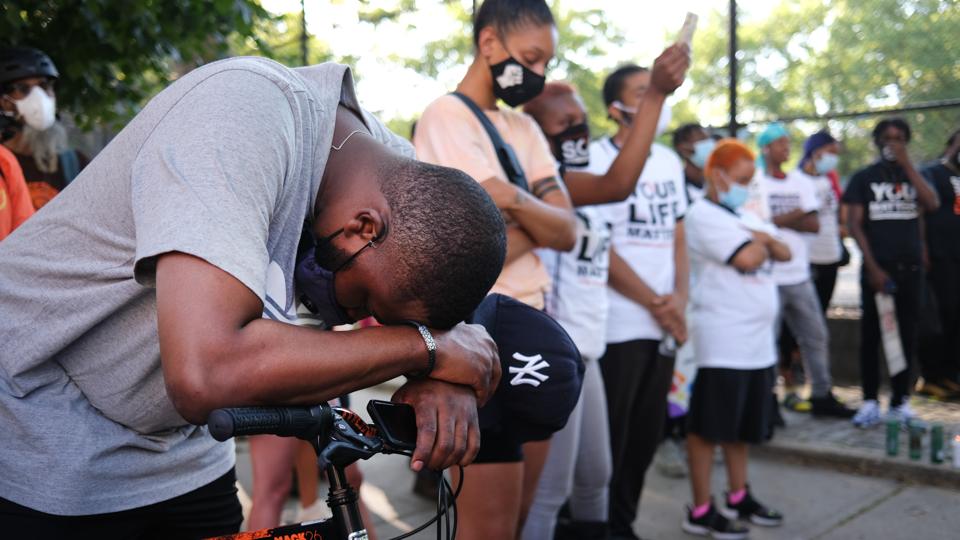 The group Save Our Streets (S.O.S.) holds a peace march in response to a surge in shootings in the … [+] Bedford Stuyvesant neighborhood in Brooklyn on July 16, 2020 in New York City. The march was held near the scene in Brooklyn where a one-year-old child, Davell Gardner Jr., was recently shot and killed. Davell was shot near a playground during a Sunday picnic when gunfire erupted. Two other adults were wounded in the evening shooting. New York City has witnessed a surge in gun violence over the past month with 9 people killed, including children, and 41 others wounded on the Fourth of July weekend alone. (Photo by Spencer Platt/Getty Images)

There have been a total of 777 recorded shootings in New York City from Jan. 1 through the end of July, which is more than NYC had in the calendar year of 2019.

More than 240 people have been killed, and more than 1,000 shootings have been recorded thus far this year in Philadelphia.

According to statistics released Saturday by the Chicago Police Department, through the first seven months of 2020, there have been 440 homicides and 2,240 people shot (which accounts for 150 more gun deaths and 760 more shootings in Chicago compared to the same period last year).

A review of crime statistics among the nation’s 50 largest cities by the Wall Street Journal found that reported homicides were up 24% this year.

President Donald Trump has blamed increased violence in many U.S. cities on Democratic lawmakers (on Friday, he singled out his New York City and, what he called, its “radical left” mayor).

However, according to WSJ’s analysis, “the rise in killings is a bipartisan problem,” with homicides rising at a double-digit rate in most of the big cities run by Republicans, including Miami, San Diego, Omaha, Tulsa, and Jacksonville.

“It only gets worse from here,” said Joseph Giacalone, a retired NYPD sergeant and an adjunct professor at John Jay College of Criminal Justice. “As the shootings continue, so will retaliation. It’s a vicious cycle that the NYPD worked hard to mitigate, but that they are no longer able and, in some cases, willing to do.”

The spike in gun violence has been particularly alarming of late. Over the previous six days alone, 36 individuals had been victims of gun violence in New York City, leading to seven fatalities. The month of July was exceptionally violent in Chicago, with 105 homicides and 584 shootings reported. According to Eduardo Bocanegra, senior director of READI Chicago, the recession and coronavirus lockdowns have hurt programs aimed at curbing violence. NYC Mayor Bill deBlasio announced an “End Gun Violence Plan” last month, but pundits have criticized the plan for its lack of specifics. “It’s a perfect storm out there. Not only are the courts not fully open, but don’t fail to notice that there is a historic pandemic and economic crisis right now,” said de Blasio. President Donald Trump has frequently boasted of how federal agents dispatched to Portland quelled uprisings in that city. Trump has also recently announced his intention to send federal agents to Chicago and other Democratic-led cities. In response, Chicago Mayor Lori Lightfoot penned a letter to Trump, stating, “We need you, as President, to take a leadership role in enacting meaningful and common-sense gun legislation, which you so far have refused to do.”

Comments by Rep. Alexandria Ocasio-Cortez (D-NY) last month on the root causes for recent increases in crime in New York City led to an intense backlash from Republicans pundits and lawmakers. “Republicans are all upset that I’m connecting the dots between poverty and crime. I know most of them haven’t experienced or seen these issues first hand, but I have. This may be hard for them to admit, but poverty and crime are highly linked, both violent & nonviolent alike,” declared Ocasio-Cortez in mid-July.

2,262: That’s the number of murders recorded in New York City in 1990 (roughly equivalent to the combined number of killings in the nation’s largest 25 cities so far this year), which serves as a reminder that homicide rates are still far lower than historical highs.

Full coverage and live updates on the Coronavirus

Tulsa confronts violent past ahead of Trump rally