Skip to content
You are here
Home > Financial > Inside the Republican lunch that slowed McConnell’s plan to rush the impeachment trial
The previous night, McConnell had introduced his resolution laying out the rules for how the trial would unfold. Under McConnell’s plan, opening statements would be condensed into just two calendar days, drawing outrage from Democrats who argued McConnell was rushing the trial and trying to push the debate into the middle of the night when most Americans would be asleep.
It turns out that it wasn’t just Democrats who were unhappy with McConnell. At the lunch multiple Republicans argued for a change to the rules, according to sources familiar with the lunch who spoke to CNN.
While moderate Sens. Susan Collins of Maine and Rob Portman of Ohio led the charge, they were joined by a number of more conservative members of the GOP conference who pressed McConnell, a person familiar told CNN.
In all about 15 senators argued in favor of changing McConnell’s resolution, a Republican aide told CNN. That included some of the President’s staunchest allies such as Arkansas Sen. Tom Cotton, Alaska Sen. Dan Sullivan, South Dakota Sen. Mike Rounds and Mississippi Sen. Roger Wicker, according to the Senate aide. On Tuesday night, Cotton’s office denied that he argued in favor of changing the resolution.
Members were worried that by rushing things, they could inadvertently give traction to Democratic complaints of an unfair trial, and put vulnerable Republicans up for reelection at a further disadvantage. As the lunch went on, it became clear that the overwhelming majority of the conference supported changing McConnell’s resolution, according to the aide.
Their complaints were heard.
Minutes before Tuesday’s session kicked off, a Senate staffer quietly struck through a few sections of the typed resolution with a pen, writing in the alterations by hand.
The 11th-hour amendment, which extends the allotted time for opening arguments from two to three days and relaxes the evidence submission rules, was widely seen as a concession to moderate Republican senators, and a small win for Democrats.
It was also a procedural defeat for the White House, which had pushed McConnell for the shorter time frame, according to a person familiar. 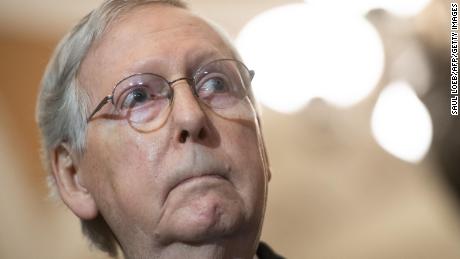 While some viewed the rule change as the rare instance in which McConnell misread his conference, others saw something more strategic in the move — one where Republicans could be viewed as pushing back on a White House bent on confining the terms of the impeachment trial.
Sen. Chris Coons, a Delaware Democrat, thought McConnell just miscalculated Republican senators’ willingness to stay in the Senate until very late at night. “That is exactly what I think happened,” Coons said.
Whatever the reason, the incident underscores how little room McConnell has to maneuver. While he can pass the resolution with a simple majority, he has just a three-seat advantage and cannot risk defections.
Earlier in the day, Portman had hinted a change might be coming. As he left McConnell’s office about an hour before the start of the trial, Portman told CNN he wanted the time for opening arguments to be extended.
“I hope that can be worked out,” Portman said. “I’m told it’s being worked on.”
It was clear even as early as last week that the White House might not get its way. Sen. Thom Tillis, a Republican from North Carolina, suggested to reporters last Friday a longer period was possible.
“I’ll be interested to see whether or not that gets elongated over a few days,” Tillis had said.
During a break in the trial Tuesday afternoon, other Republican senators praised the amended resolution. “We aren’t trying to hide testimony in the wee hours of the morning,” Sen. Ron Johnson told CNN.
“As a visual, it seems fairer to spread the 24 hours,” said Wicker.
Despite the changes, it’s hardly altered the Democratic opposition to McConnell’s resolution. Democratic Sen. Patrick Leahy told CNN that he did not view the changes as significant, saying there were still key breaks with President Bill Clinton’s trial.
“I think the fact is that Mitch keeps telling you folks in the press that we’re doing it just like Clinton. Of course, he’s not,” Leahy said. “And I hope somebody will call him on it.”
On Tuesday morning, Minority Leader Chuck Schumer had sharply criticized McConnell’s resolution from the Senate floor, saying it would “result in a rushed trial with little evidence, in the dark of night.”
By Tuesday afternoon, Schumer seemed at least slightly appeased. “I’m very glad they moved to three days instead of two so we won’t be hearing arguments at two in the morning,” Schumer told reporters during a brief break in the session.
The real test, Schumer said, will come when they vote for witnesses and documents once the trial gets past opening arguments.
This story has been updated to include comment from Sen. Chris Coons and from Sen. Tom Cotton’s office.

Top House Republican: ‘There will be no normally functioning economy if our hospitals are overwhelmed’

Millions of cicadas to emerge in US after 17 years

‘We were wrong’: NFL to allow players’ protest