Privately, Sanders’ aides and allies feel that Clinton is trying to bait them after she reiterated in a Hollywood Reporter article that “nobody likes” the Vermont senator, and refused to commit to supporting him if he wins the primary. In her remarks, published two weeks before the Iowa caucuses, they see a political establishment that is trying to stop him as he rises in early-state polling.

Yet it was more important to regain control of its message after a week-long whirlwind featuring unplanned spats with Elizabeth Warren, Joe Biden and now his 2016 rival.

Sanders’ campaign told staffers internally to not discuss Clinton’s comments, and Sanders released a statement saying he is focusing on impeachment and that “together, we” will defeat President Donald Trump. His aides are also urging his online fans to volunteer for him instead of tweeting about Clinton.

“A less petty, self-absorbed person would look at a devastating, embarrassing election defeat and thank her former primary opponent who, based on the record, went to extraordinary lengths to support her,” said Jonathan Tasini, the author of “The Essential Bernie Sanders and His Vision for America” and a national surrogate for Sanders in 2016. “Bernie, as he often does, sidestepped engaging in this nonsense, choosing to focus on the important matters at hand, mainly impeachment. Bottom line is that the more Hillary Clinton speaks, the less people care what she says and devalues her own role so I think it will have close to zero impact on the race.”

If anything, the bomb thrown by Clinton had a galvanizing effect: Sanders’ grassroots supporters posted images of receipts of their donations to him on social media Tuesday, and the hashtag #ILikeBernie trended on Twitter.

While the Sanders campaign is attempting to maintain restraint in the wake of Clinton’s recent interview, though, the operation has in recent weeks shown the strain of a disorganized team that has struggled to stay on the same page with the candidate himself.

An episode on Monday illustrated the dynamic: David Sirota, Sanders’ speechwriter, shared an op-ed with supporters via email titled “‘Middle Class’ Joe Biden has a corruption problem — it makes him a weak candidate,” which was written by Sanders surrogate Zephyr Teachout.

But when asked about the opinion piece on MSNBC, Sanders’ national press secretary Briahna Joy Gray said that “if someone wants to describe that as corrupt, that is up to them.”

Later in the day, Sanders apologized: “It is absolutely not my view that Joe Biden is corrupt in any way. And I’m sorry that that op-ed appeared.”

To some who watch Sanders’ orbit closely, mixed messages such as Monday’s are one of the weaknesses of a movement campaign that includes legions of activists who see it as their own. A former Sanders aide said the back-and-forth knocked the team off what its message should have been this week: The co-chairs of the Congressional Progressive Caucus, Pramila Jayapal and Mark Pocan, recently threw their weight behind him, showing that he is consolidating left-wing endorsements and growing his campaign.

“What they would be doing is spending all their time talking about how much support they’re getting from people who spent the last 10 months on the fence,” the person said. “Look at Pocan. Look at Jayapal.”

After Clinton’s comments, Sanders stayed above the fray when peppered with questions from reporters and sought to use humor to move on.

His campaign staff largely remained positive as well, circulating their #ILikeBernie stories. But others were more aggressive: Shaun King, a Sanders surrogate, highlighted brutal comments made by a top Clinton aide and consultant in 2016 online. And without naming names, Gray said on Twitter canvassers are “running on haterade” and “the unshakable understanding that healthcare is a human right.”

“Where would you stick the knife in?”

“Bernie needs to be ground to a pulp…crush him as hard as you can.”

I need you to understand how they think of Bernie behind the scenes in her world. It’s gross and harsh. And not normal.

Still, the episode allowed Sanders — and the progressive movement — to be seen by mainstream Democrats as the victim of party division for once, instead of as an instigating force.

Tom Steyer, one of Sanders’ primary opponents, jumped in on the “I like @BernieSanders” trend. Justice Democrats, the left-wing group that recruited Alexandria Ocasio-Cortez to Congress, launched a petition calling on Clinton to back the eventual nominee.

“Hillary Clinton has the right to support or oppose any candidate she wants and every right to express that sentiment publicly,” said Dan Pfeiffer, a past adviser to former President Barack Obama, of the primary. “But every Democrat should commit to supporting the nominee against Trump.”

A former Clinton 2016 aide said, “Bernie is far from my favorite candidate, but he has been crystal-clear that he’d back any nominee to the hilt — and with Trump in the White House, it is a travesty for any Democrat to suggest they’d behave otherwise.”

Clinton’s longtime spokesman, Nick Merrill, did damage control in the wake of the interview, saying on Twitter that “we all need to work our heart out for the nominee” and Clinton “won’t be any exception.”

But Clinton’s comments in the article were far from clear on that front: Asked if Sanders “gets the nomination, will you endorse and campaign for him?” she replied, “I’m not going to go there yet. We’re still in a very vigorous primary season.”

After pressure, Clinton tweeted on Tuesday night: “I thought everyone wanted my authentic, unvarnished views! But to be serious, the number one priority for our country and world is retiring Trump, and, as I always have, I will do whatever I can to support our nominee.“

David Brock, a longtime Clinton ally who founded a super PAC to support her in 2016, suggested it is difficult to know why she is weighing in now on Sanders.

“Hard to know about the timing, but the quotes were clearly going to come out in the middle of the primary,” he said. “I think she’s expressing a pretty widely held view of Sanders and especially some of his supporters, that they’re a negative force in the primary — routinely smearing the Democratic Party as corrupt, unfairly maligning the reputations of opponents, lying about their records.”

Sanders’ grassroots supporters likewise express the sense that Clinton’s comments show that she looks down on them. They grate at the term “Bernie Bros,” which she used in her interview, especially at a time when some of Sanders’ most well-known supporters are women of color such as Ocasio-Cortez and Rep. Ilhan Omar. 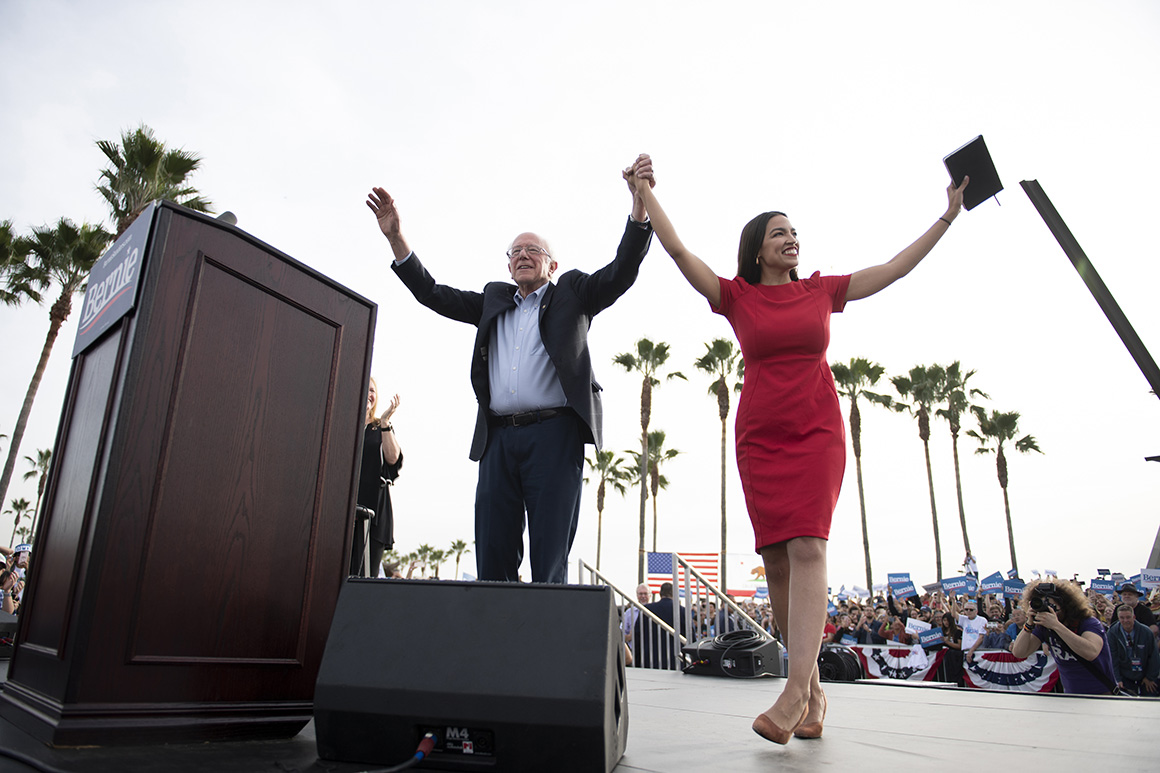 Sen. Bernie Sanders’ grassroots supporters grate at the term “Bernie Bros,” especially when some of his most well-known supporters are women of color like Rep. Alexandria Ocasio-Cortez. | Kelvin Kuo/AP Photo

And many feel the outrage over his supporters is manufactured. According to Google Trends, the term “Bernie Bros” was searched most frequently in 2016 around the Iowa caucuses, which Sanders narrowly lost to Clinton, and the New Hampshire primary, in which he defeated her by more than 20 percentage points. This year, the term has been searched most in recent days as well as immediately after he entered the primary in February.

In a call with staff Tuesday, Jayapal urged Sanders’ campaign to stay positive and ignore attacks, according to people on the line. She said “strength emerges in times of crisis,” and talked about why she came to support Sanders.

It remains to be seen whether or for how long the Vermont senator’s team can listen to Jayapal, however, when many in his world feel that they are held to a double standard. After thanking Sanders on Twitter Monday night for his apology, Biden’s campaign is now texting supporters that “Sanders’ campaign has unleashed a barrage of negative attacks” and asking them to donate.

“We’ve got to focus on beating Donald Trump, and we’ve got to keep our eyes on the prize,” Sanders surrogate Abdul El-Sayed told POLITICO. “Any conversation or argument that isn’t helping us do that isn’t worth any of our time.”

Why Breonna Taylor’s name is chanted at demos

Trump administration at odds with allies over reimposing U.N. sanctions on Iran

Pelosi warns maskless lawmakers may be thrown out