Skip to content
You are here
Home > Financial > Van Jones: Atlanta police shooting is about probation, not just police
Those are the words of Rayshard Brooks during a heartbreaking interview filmed in February of this year — just a few months before he was tragically shot by police. Brooks talks about the agony of being trapped in a prison reentry and probation system that won’t let him get back on his feet.
His killing at the hands of Atlanta police certainly highlights the need for police reform. But it demonstrates something else that is equally urgent, though rarely discussed: America’s desperate need to overhaul our probation system.
There is a sad irony in America’s justice system: our police have too much power and too little oversight. And people returning home from prison have too little opportunity and too MUCH oversight. In that Wendy’s parking lot, those twin failures were on a collision course — and Brooks paid the ultimate price. 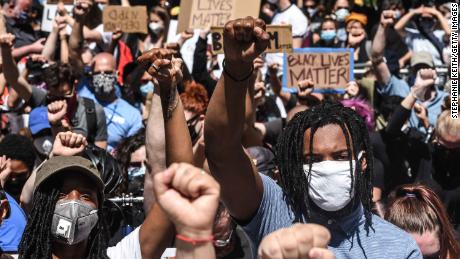 For a person on probation, as Brooks was, any contact with a police officer — for any reason — means an almost certain return to the horrors of a jail cell. It is safe to assume that Brooks did not want to go back to jail over sleeping in his car or failing a sobriety test, lose everything he had and be forced to start his life over again.
In other words, we do not know why the Atlanta police officer chose to shoot a man who was running away from him. But we can guess why that man chose to run, in the first place. Brooks didn’t want to lose his liberty. Instead, he wound up losing his life.

Rayshard Brooks: a voice from beyond the grave

In the heartbreaking interview filmed by tech startup Reconnect as part of a research project earlier this year, Brooks says:
“If you do something that’s wrong, you pay your debts to society, and that’s the bottom line.”
But he also wonders if there will be a time when he’ll be able to stop paying for them.
“That’s a hard feeling to stomach you know, with you going out and you’re trying and by you having this so-called record… it’s hindering us from going out in public to try and provide for ourselves… and getting ourselves back on track.”
Brooks lost his car and was under mounting pressure to find cash to pay for court fines and probation fees. He frustratedly noted that the process consumed the majority of his time, saying: “It takes you away from your family. You have to try and go out, make means, and yet, my kids. I want to spend some time with my kids, but I really don’t have the time. I have to try and go out, make money for this, make money for bills or trying to get myself back on track.”
“You go to fill out our application and you get to this question: have you ever been convicted of a crime, or have you ever been arrested? You know, you’re sitting there like ‘oh my God. I hope this doesn’t hinder me from getting this job.’ and then you finish up the application and you have some employers that come back to you: ‘Well, Mr. Brooks, unfortunately, we can’t hire you due to the fact that you’ve been incarcerated or you’ve been arrested for this and that and that… just breaks your heart.”

In this election season, we have talked a lot about police misconduct and overcrowded prisons. But the other racially unfair system that impacts even more people is this: mass supervision.
There are 4.5 million people on probation and parole, and their lives are a living hell. They’re caught in a spider’s web of catch-22s. They can be sent back to prison even if they don’t commit crimes.
The impact of this is deeply traumatizing — not only for the person on probation, but for their children and family members who are forced to endure a never-ending cycle of separation and loss.
As Brooks says in his heart-wrenching interview, “It’s hurting us, but it’s hurting our families the most. You know, so as we go through these trials and tribulations, it’s hurting our kids, and it’s taking away from our families, you know. The sole provider is a male or female figure, you know, speaking for both, and it’s taking away from us.”
As is clear in Brooks’ interview, people in his situation are made unnecessarily desperate. They are trapped in a system that makes no sense, and very few people can reasonably escape it.
If we want to prevent incidents like this, we must strengthen police training and discipline cops who violate policy. But we also need to dramatically transform the probation and parole system in America so fewer people are made desperate by impossible circumstances created by misguided government policy.

The probation system can be transformed

I know a great deal about this subject, because I am the CEO of REFORM Alliance — an organization founded in 2019 by Meek Mill, Michael Rubin, Shawn “JAY-Z” Carter, Robert F. Smith, Clara Wu Tsai, Robert Kraft, Michael Novogratz, Dan Loeb and Laura Arnold.
We launched REFORM to build on the momentum of the #FreeMeek movement (the movement born in response to the unjust reincarceration of Meek Mill for probation violations, now an Amazon Prime documentary series). Our organization’s mission is to dramatically reduce the number of people who are unjustly under the control of the criminal justice system — with a hyper-focus on the probation and parole system.
As a result, I have come to believe in nine powerful solutions that could shrink and transform the system of mass supervision (which includes probation and parole).

Microsoft to close stores in Danbury, Farmington in strategy switch

Starbucks Says Customers Must Wear Masks At Its Cafes

Trump terminates US relationship with WHO