Skip to content
You are here
Home > Financial > ‘Say his name! George Floyd!’: Nationwide protests continue on ‘Blackout Tuesday’ in Chicago, Miami, Phoenix, across US 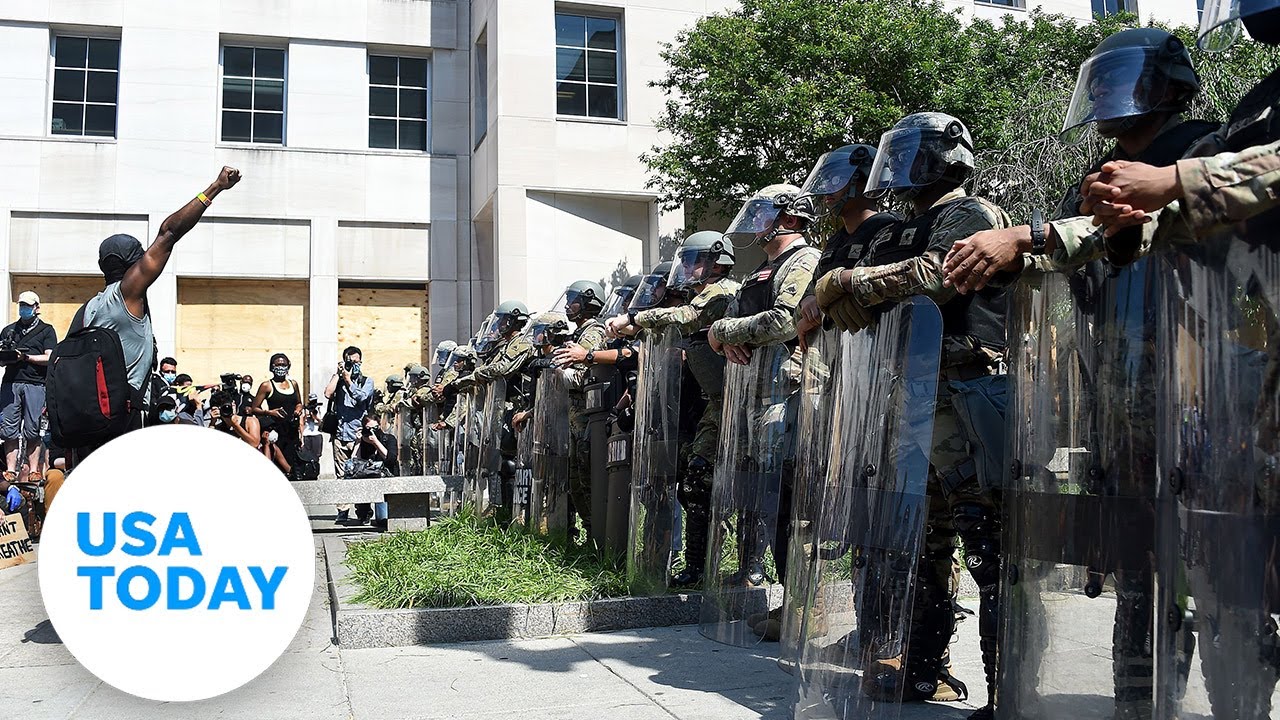 Protests and demonstrations nationwide have become the norm in the wake of the death of George Floyd, a black man who died after a now-fired police officer kept a knee to his neck for nearly nine minutes.

Derek Chauvin, the former officer seen on video with his knee on Floyd’s neck, has been arrested and charged with third-degree murder, though Floyd’s family is pushing for first-degree murder charges. Three other officers involved with the incident, however, haven’t been charged, prompting continued calls across the country against police brutality.

Here’s a look at city-by-city protests on Tuesday night:

Detroit Police Chief James Craig told reporters he didn’t want to make any arrests on the fifth night of protests across the city in the wake of George Floyd’s death in Minneapolis.

“Our goal is not to arrest,” Craig said. But, he added, “We can’t afford to have what we’ve seen in other places.”

However, after a group of people splintered off from a gathering that began near the downtown Detroit Police Department headquarters and defied a citywide curfew, police enforced the law.

After continuing to ask protesters to remove themselves from the road, Detroit police boxed them in from all sides and began making arrests about an hour after the citywide curfew. Officers used zip ties to detain protesters and put water in the eyes of those hit by pepper spray. They lined up the arrested, while seated, on the sidewalk.

Chicago: Protesters take to the streets: ‘I’m tired of seeing our people killed’

As separate marchers began across the city, thousands of young people from

Volunteers along the way handed out snacks and water amid the 90-degree heat. CPD officers on bikes guided the protest south.

West Siders Angel Griffin, 25, and Tatyiana Mack, 26, say they were there to march peacefully and bring attention to police brutality. “There have been so many personal experiences I’ve had that have never hit the news. I want people to know. I want them to care,” Mack said.

George Floyd protests:How did we get here?

Over the course of nearly four hours in 90-degree heat, the group marched south to Lincoln Park and then west to the 18th district police station, where dozens of officers lined either side of the street. Tensions rose as protesters formed lines opposite the officers, chanting “who do you protect? who do you serve?”

The marchers eventually took a knee outside the station, and organizers and protesters took turns speaking to the crowd, singing and sharing stories of their experiences of police brutality.

Marching amidst the crowd, Tasha Quinn, 33, said she normally doesn’t protest but said she could no longer stay at home. Carrying a sign reading “Stop Killing Our Black Men,” Quinn said she was born near where George Floyd died in Minneapolis, and now lives in Chicago.

Quinn said she and her friends deliberately chose comfy clothes that they didn’t care about, and sensible shoes they could run in, just in case violence broke out during or immediately after Tuesday’s march. Chicago remains under a curfew beginning at 8 p.m. and Quinn said the possibility of violence in her community is always a concern- both from criminals and from police officers treating innocent people unfairly.

Chicago police on Monday made 396 arrests, including 146 for looting, according to a spokesperson.

Phoenix: Thousands of protesters take to streets as ‘Churches Stand Together’

More than 1,000 people met outside Phoenix City Hall and began marching through downtown Phoenix by 5:30 p.m.

Meanwhile, hundreds of people, maybe more than 1,000, gathered outside Neighborhood Ministries near 19th Avenue and Van Buren Street. They planned to begin walking the half-mile to Wesley Bolin Memorial Plaza outside the Arizona Capitol and hold a prayer service.

The protest at the Capitol was organized by “Arizona Churches Stand Together for Black Lives,” which created an event page that showed more than 600 planning to attend and 1,000 more interested.

The group was “organically” formed in the past 24 hours with three Phoenix churches at the helm — Roosevelt Community Church, Redemption Church Alhambra and All Souls Phoenix — according to Dennae Pierre. The churches’ congregations are multiethnic, many from black and Latino communities, she said.

“Our hearts are broken over the continued violence against black lives,” said Pierre, whose husband, Vermon, is a pastor at Roosevelt Community Church.

“Year after year, we have these stories that surface and, you know, what does it look like to not just be sorry about it and sad until the news dies down, but to really commit to a life of change and being part of rebuilding what needs to be built?”

Protesters returned to the streets in downtown Louisville following the fatal shooting of David McAtee and five days of protests over the death of Breonna Taylor.

A few hundred people gathered outside Metro Hall at 5 p.m., just a few hours after Louisville Metro Police released additional video footage they say shows McAtee shooting a gun before law enforcement officials returned fire. Other groups have popped up around town, including another gathering at Dino’s Food Mart, where McAtee was killed.

A candlelight vigil began at around 9:30 p.m. by Dino’s Food Mart.

A crowd had been at the scene all evening, according to Courier Journal reporters Phillip M. Bailey and Johnathan Bullington, honoring the life of the local barbecue shop owner. Those in attendance lit up candles to remember the 53-year-old McAtee while his nephew, Marvin McAtee, served barbecue to those in attendance.

Louisville’s curfew went into effect more than a half-hour earlier at 9 p.m.

The Rev. Stacey Smith organized a pair of marches in the Twin Cities on Tuesday, but even she was surprised at the large turnout.

“God bless you all. This is much bigger than I thought that it would be,” Smith told a gathering of about 300 people shortly before they set out for a seven-block walk down 38th Street in south Minneapolis.

The destination was Cup Foods, where George Floyd died on Memorial Day while handcuffed in police custody. Smith, a leader in the African Methodist Episcopal church here, told the faith leaders ready to walk with her: “We are here for justice and peace today.”

‘Word of God as a political prop’:GOP senators criticize Trump after George Floyd protesters forced out of park

Black clergy members led the way, followed by white ministers “as a symbolic show that you’ve got our backs in this,” Smith said to loud applause.

It was billed as a “silent clergy march” and the group quietly proceeded down the middle of the street, stretching for two blocks while traffic stopped.

One man on a bicycle watched and broke the silence by raising his hands over his hands and clapping.

In downtown Los Angeles, hundreds of protesters remained peaceful while at times kneeling en masse against police brutality and at others calling for the resignation of a Los Angeles Police Department chief who had blamed looters for George Floyd’s death.

Roughly two dozen police officers in riot helmets and a handful of California National Guardsmen stood under ornate columns and guarded the art deco-styled City Hall from protesters who made no effort to breach metal barricades or police tape.

LAPD:Chief Michel Moore apologizes after saying George Floyd’s death is on the ‘hands’ of looters

Some of the protesters waved signs calling for the firing of Police Chief Michel Moore, who on Monday had lashed out at Los Angeles looters by declaring: “His death is on their hands, as much as it is on those officers.”

At around 1 p.m., the protesters left City Hall to snake, chanting, through downtown. Guardsmen armed with semi-automatic rifles stood in front of businesses that were vastly shuttered or boarded up due to a combination of the novel coronavirus and nights of looting that have brought comparisons to the city’s riots following the Rodney King beating in 1992.

But Tuesday afternoon, with the downtown air pungent with sage and marijuana, the protesters seemed to be in a constructive mood. Some distributed face masks. Others, veggie quesadillas. Chinatown resident Brandon Anaya and two friends handed out bottles of water, granola bars and bananas.

Anaya, who wore a Mexican flag bandana over his mouth and nose, was born the year of the L.A. riots. He said he had to convince his father Francisco, who had lived through them, that participating in this protest was a good idea.

“He said it’s time for change, to do it right, and to do it properly and peacefully, and I think that’s what we’re seeing today,” said Anaya. “We’re Hispanic, and the police treat us the same way they treat black people.”

Protesters kneeled in front of the officers and yelled for them to join them, but the cops didn’t budge. An irate protester pointed at them and let loose a stream of profanities. It was the sort of tense situation that Americans have watched boil over into violence many times over the last week.

An afternoon crowd of 100 grew to nearly 300 by evening as it weaved past the downtown detention center and courthouse, through the historically black neighborhood Overtown and into Wynwood with minimal police presence and bouts of intense rain.

The young, racially diverse crowd repeated chants of “black lives matter” and “say his name: George Floyd” as they moved through the streets surrounded by organizers who halted traffic around them.

Organizers stopped every few blocks to share the stories of the neighborhoods: calling for an end to the bail system outside the jail, remembering how Interstate 95 plowed through the historically black Overtown and pointing out black-owned businesses in Wynwood.

Demonstrators gathered in downtown Indianapolis for the fifth straight day to protest recent police-involved killings of black people, including George Floyd and Dreasjon Reed in Indianapolis.

The city is on its third night of curfew, which began at 9 p.m. and ends at 6 a.m. Wednesday.

Just before 8:30 p.m., a crowd of roughly 200 demonstrators started moving south on Meridian Street from Monument Circle and toward the City-County Building.

A group of protesters was seen debating whether to stay or go home once curfew goes into effect. One protester warned that those who stay past curfew “will be engaged by the police.”

The large crowd protesting near the White House past the 7 p.m. curfew continued to chant and demonstrate against police brutality.

Some, calling for a peaceful protest, booed a man who tore down a street sign in the area. People also threw bottles at him as he climbed down from the street signpost.

Residents in a northwest neighborhood of the city, far from the main protests, leaned out their apartment windows, banging together frying pans and other noisemakers.

The clanging stopped after several minutes. Helicopters could then be heard circling in the distance. Meanwhile, the vast majority of protesters remained outside the White House.

Tensions escalated, resulting in police deploying tear gas and flash-bang grenades at protesters who threw fireworks and other objects at them.

Following a protest and peace rally at West Middle School, which remained peaceful, hundreds of protesters at various points split off and began walking eastbound toward downtown.

Hundreds of protesters first gathered outside Brockton City Hall in the amphitheater, where several impromptu speeches took place. Protesters then walked to the nearby Brockton Police Department, where they have remained for hours.

How a Nashville guitar maker, Novo, struck a new chord after COVID-19 shut down its business

Pompeo lashes out at China at ‘Quad’ meeting