Skip to content
You are here
Home > Financial > A massive cyclone battered India and Bangladesh. The coronavirus makes recovery even harder.

A devastating cyclone pounded India and Bangladesh on Wednesday, killing more than 80 people and leaving thousands homeless. That will only compound the crisis those countries face from the coronavirus.

Cyclone Amphan, considered one of the most dangerous storms in recent memory, wiped out bridges, trees, electric lines, and homes after making landfall. The storm was weaker than expected once it hit the region’s coastline, but it still left a wake of destruction, forcing many to live without power or shelter.

The storm mainly hit the Indian states of Odisha and West Bengal in the country’s east, home to around 130 million people, and western Bangladesh. And according to Deepmala Mahla, the Asia director for the humanitarian organization CARE, it did enough damage to set back the hard-hit areas years economically.

In the most affected districts in those two Indian states, about 90 percent of “social assets” — places like health centers, schools, and businesses — have been destroyed or damaged by Amphan, CARE India’s director Shantamay Chatterjee told me. In Calcutta, West Bengal’s capital of nearly 15 million people, water flooded the streets and the airport. The wind from the storm, which reached over 100 miles an hour, littered the region with debris, including fallen trees and power lines.

“I have never seen such disaster,” Mamata Banerjee, West Bengal’s chief minister, told reporters on Thursday. “All areas have faced destruction. Nothing is left.”

In Bangladesh, hundreds of villages are underwater and about 1 million people don’t have electricity anymore. And in the southwestern district of Bagerhat, about 500 fish farms were flooded.

CARE’s Mahla told me that many farms are now in trouble because the storm surge wiped out crops, and that the salinity from the seawater will make it nearly impossible to grow crops next year. That likely means that farming communities will go hungry and suffer economically in the coming years.

And all of this is just the picture experts have so far, one day after the storm. The full extent of the damage in India and Bangladesh remains unclear. Lack of electrical power means many affected by Amphan, primarily those who live on islands, can’t ask for help or report on their situations. 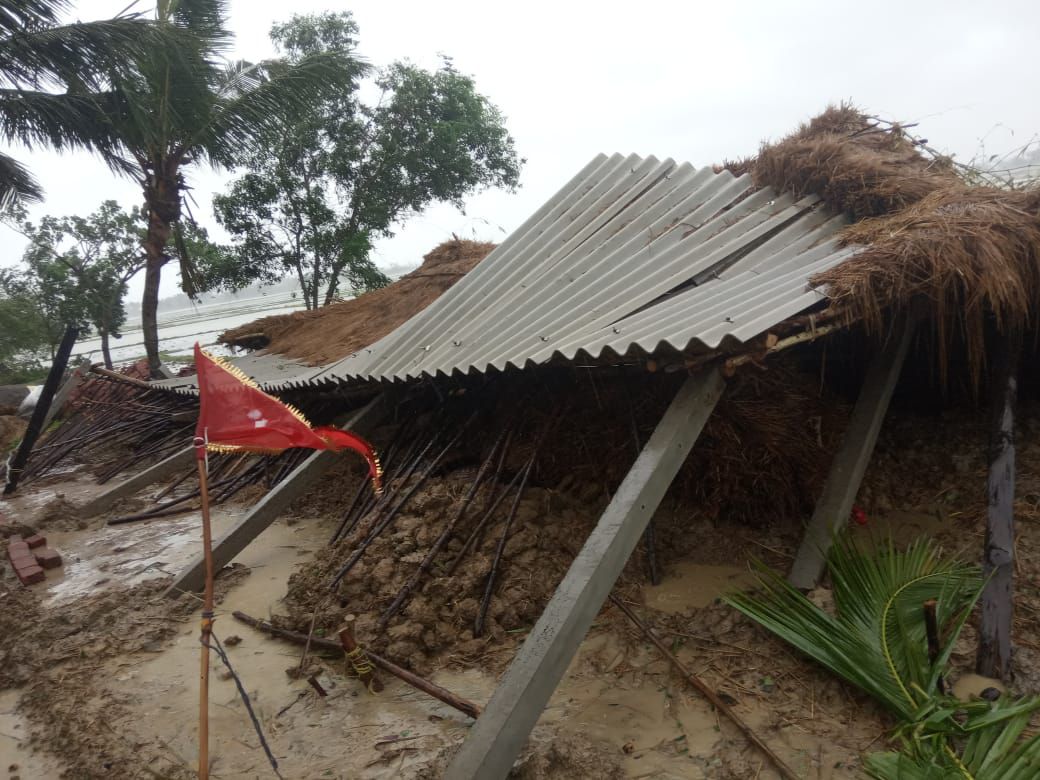 A structure in India’s Kendrapara district was destroyed by Cyclone Amphan on May 20, 2020. Courtesy of Shantamay Chatterjee 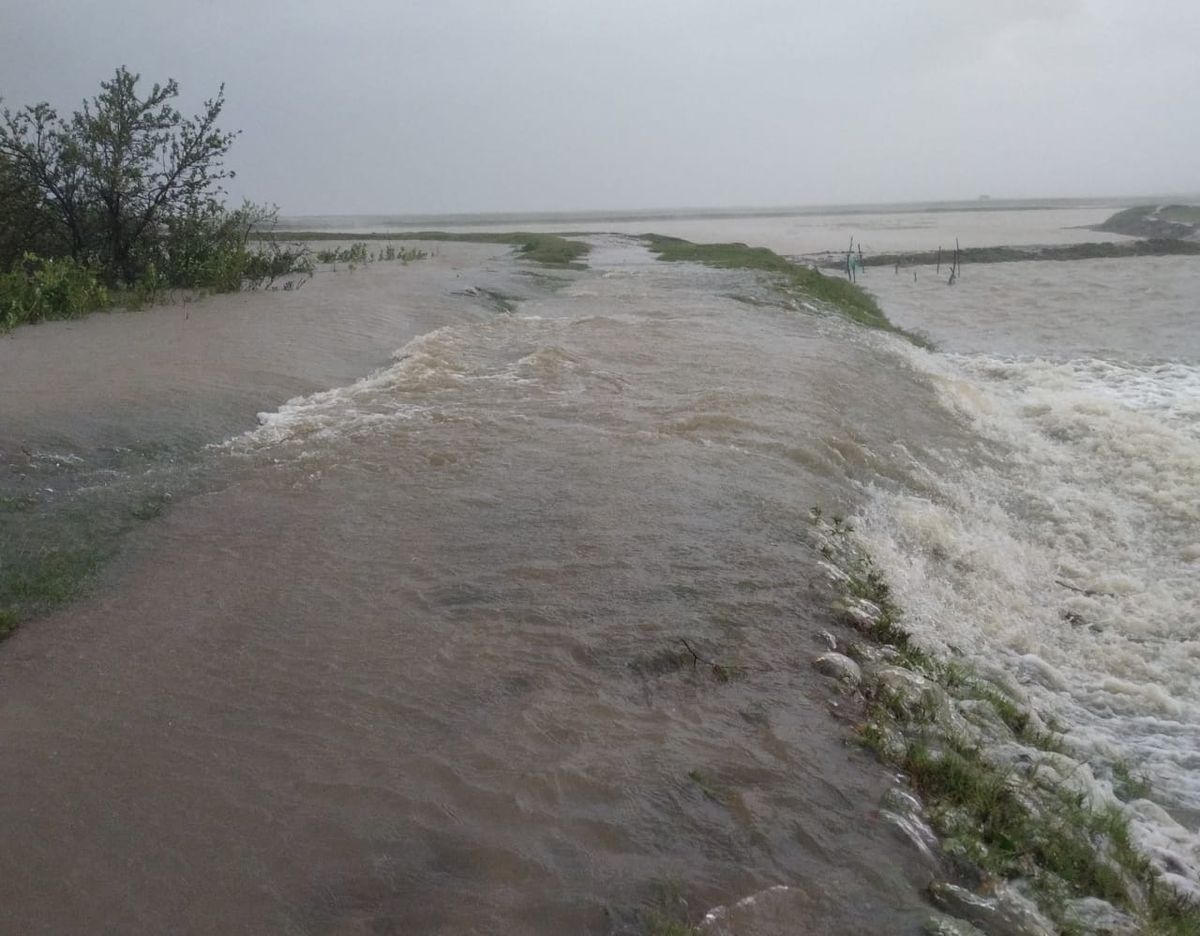 What is clear is that the cyclone has unleashed a disaster that will require immense government and humanitarian efforts to recover from — a disaster that’s made even more complex by the coronavirus pandemic.

So far, the nations’ leaders are pledging such help. “No stone will be left unturned in helping the affected,” Indian Prime Minister Narendra Modi tweeted on Thursday. Bangladesh’s government said nearly 2,000 medical teams are already at work, with likely more to come.

But few experts, including retired Air Force Gen. Douglas Fraser, who led the US military response to the 2010 Haiti earthquake, believe the recovery effort will be easy. “It’s a difficult place they’re in,” he told me. “Like every disaster, it’s going to start out slow, and it’s going to be difficult.”

India and Bangladesh, unfortunately, are used to this kind of crisis.

“India and Bangladesh are always dealt a bad hand when it comes to responding to cyclones and tsunamis,” Michael Kugelman, an expert on South Asia at the Wilson Center think tank in Washington, told me. “That’s because these countries and broader South Asia face a perfect storm of factors — densely populated coastal areas, poverty, and bad infrastructure, to name a few — that exacerbate vulnerability.”

But, he added, “that doesn’t make it any easier to handle them.”

The main reason is India’s east and Bangladesh’s south lie on the Bay of Bengal, an impoverished region of 500 million people that has seen 26 of the deadliest 35 cyclones ever recorded. Just last year, for example, India’s Odisha state got hit hard by Cyclone Fani and has yet to fully recover from it.

The area is ripe for complications because it’s barely above sea level and has low, concave bays that funnel sea water onto the land. And the bay’s surface temperature is typically warm, which helps fuel strong storms.

That’s particularly problematic because climate change is leading to more potent hurricanes, as an analysis of storms dating back to 1979 released this week showed.

“The trend is there and it is real,” James Kossin, a researcher with the National Oceanic and Atmospheric Administration and lead author of the study, told the New York Times on Monday. “There’s this remarkable building of this body of evidence that we’re making these storms more deleterious.”

So as the region tries to recover from Cyclone Amphan, a similarly dangerous storm could soon follow behind it.

But Indians and Bangladeshis have another crisis at hand: The coronavirus is already impacting both countries.

“Many people in India and Bangladesh are refusing to leave their homes because they fear they’ll get infected in storm shelters,” CARE’s Mahla told me. Relief organizations like Mahla’s usually direct food and medical equipment to areas near such shelters. If those severely impacted by the storm don’t go to those areas, then, they might not get the supplies they need.

Those who worry about getting sick in a storm shelter have an understandable concern, experts say, as it’s nearly impossible for the thousands of people packed into tight quarters to practice social distancing. If someone infected with the coronavirus enters a relief area, it’s completely possible they’ll unwittingly spread the disease.

Which means that both India and Bangladesh have to choose between two bad options: try to maintain social distancing, or bring people together to offer relief as efficiently as possible.

Experts believe the two governments will understandably choose relief despite knowing they’re bound to face a broader public health crisis as a result.

“It’s highly likely that this cyclone and its aftermath will intensify community spread of Covid-19, given that large numbers of people will be relocated to safer but small and crowded spaces,” the Wilson Center’s Kugelman said. “It’s a public policy nightmare for officials trying to rescue people from a destructive storm while also keeping them safe.”

The way to avoid the worst outcome, Mahla said, is for India and Bangladesh to quickly restore electricity and telecommunications and address the agricultural problems that will plague the region. But to do that while fighting off a growing coronavirus outbreak will be a herculean task.

“The harder the logistics, the harder it is to solve the problems,” Fraser told me.

Umair Irfan contributed to this report.

Every day at Vox, we aim to answer your most important questions and provide you, and our audience around the world, with information that has the power to save lives. Our mission has never been more vital than it is in this moment: to empower you through understanding. Vox’s work is reaching more people than ever, but our distinctive brand of explanatory journalism takes resources — particularly during a pandemic and an economic downturn. Your financial contribution will not constitute a donation, but it will enable our staff to continue to offer free articles, videos, and podcasts at the quality and volume that this moment requires. Please consider making a contribution to Vox today.

What’s behind the unequal threat of Covid

Trump moves to pull US out of WHO amid pandemic

FDA flags dozens of hand sanitizer brands that may be toxic

US governor ‘moved around’ as FBI tracked militia