Dodd told reporters Tuesday she remembered receiving a late-night call on March 24, right before having a movie night with her daughter.
“To get the news over the phone, that’s devastating,” Dodd said. “I couldn’t do anything for my son but cry over the phone. I couldn’t touch him. I couldn’t hold him. I couldn’t hug him. I couldn’t do anything. I don’t wish that on any parent.”
Sampson, at a different news conference Tuesday, told reporters he actually watched the gruesome viral video of his son’s death before even knowing it was him.
“When I found out it was my child, it took the breath out of me,” Sampson said, adding that he vomited. “It took some life out of me as well. It just made me numb and helpless because I wasn’t there to protect my son.” 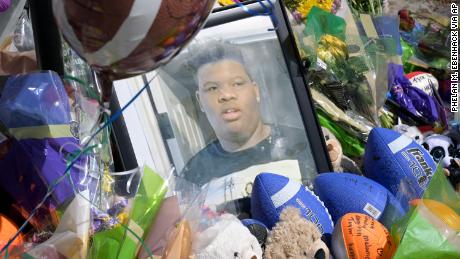 This was not how Tyre’s Spring Break was supposed to end, both parents said.
Tyre was visiting with family friends when he went to ICON Park in Orlando, Dodd said. There, he got on the Orlando FreeFall drop tower ride, which operators describe as the world’s tallest freestanding drop tower. It sends passengers up and then drops them nearly 400 feet at speeds reaching more than 75 mph, according to the park.
Video circulating on social media shows Tyre falling from his seat about five seconds after the ride begins its drop. According to an investigation by a forensic engineering firm commissioned by Florida officials, Tyre had slipped out of his seat because he “was not properly secured in the seat.”
This week, the 14-year-old’s family filed a wrongful death lawsuit against multiple defendants.
In mourning Tuesday, Dodd and Sampson explained to reporters who their son was and how they want him to be remembered.

The last conversation Dodd had with her son was by chance, she told reporters.
As Tyre was leaving for his Florida trip, he forgot his charger and had to come back to the house.
“I opened the door, and he goes back in his room, and he’s getting the little stuff he left. Mind you, we know boys don’t like to give hugs because it’s just like too mushy for him. I said, ‘Oh, you came back to give me my hug’ — I actually said my last hug — ‘You came to give me my last hug,'” she said. 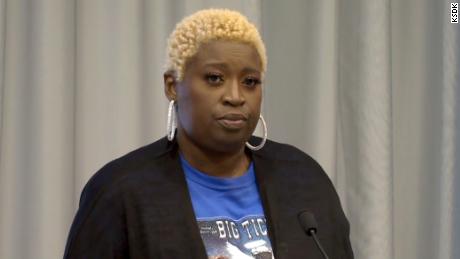 As teenage boys do, Tyre was rushing out of the door, excited for his upcoming trip. Giving a hug was slowing him down. “He turns around and says, ‘I’ll see you Saturday or either Sunday.’ And that was my last time speaking to my son,” Dodd said.
And, she added, “he ended up giving me my hug.”
“Tyre was my personal teddy bear,” Dodd said of her son, who was over 6 feet tall and weighed over 300 pounds.
A football standout back home in St. Louis, Tyre’s mother said he was known as, “Gentle Giant,” and that he also went by the nickname “Big Tick.” 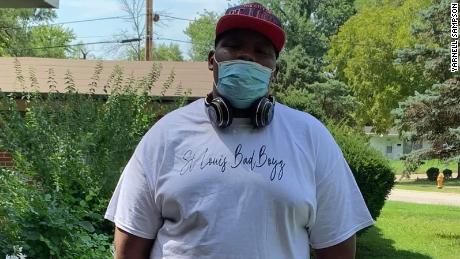 “Tick is the name that he received from the football team. Big Ticket, meaning ticket out of St. Louis, basically,” Dodd said.
She described her son as “the type of kid that you couldn’t help but want to converse with.”
“You wanted to get to know him — what was he thinking,” she said. “He just had that magnet, like, who is this child? You know, very well respected, well mannered.”
Dodd wants Tyre to be remembered “as a loving young man” and a go-getter.
“He was going to be known, but not like this. He was going to be on the football scene, NFL team, but not … this type of way, no.”

‘He was a warrior, he was intelligent,’ father says

To a father who was so proud of his son, Tyre’s death meant the loss of so much potential, Sampson said.
The teen usually visited his father for spring break, but this year, Tyre was excited to go to Florida for the thrill of the various amusement parks, Sampson said.
“In the dictionary they don’t have nothing to describe a father or parent or mother burying they child, there’s no word to describe that. So what I’m feeling right now, it’s sickening. It’s days I can’t get out the bed, make myself eat, make myself drink,” he said. 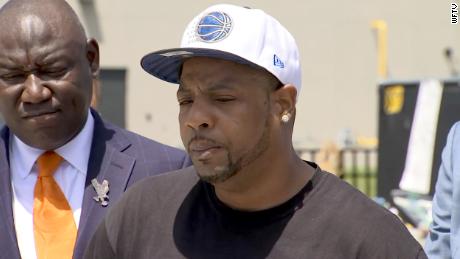 He told himself he had two options: fall into depression or stand up for his son.
Sampson chose the latter.
“I’m going to speak up for my son because he was a warrior, he was a young man, he was intelligent, intellectual,” he said.
The fact that Tyre was an elite athlete didn’t need to be the focus of his narrative, Sampson said.
“Let’s talk about the 4.0 intellectual that he could have been,” Sampson said. “He could’ve been a doctor, lawyer or scholar, an astronaut … The sky’s the limit if you got potential. He had a lot of potential.”

Dodd and Sampson are being represented by different attorneys but filed their lawsuit together.
“It’s one lawsuit, there are co-representatives of the estate equally representing the estate of Tyre Sampson as a result of his damages and their damages for the loss of a son,” said attorney Bob Hillard, who is representing Sampson along with Ben Crump.
The Orlando Freefall ride has been closed since Tyre’s death and will remain closed indefinitely.

Sampson said he wants the ride taken down, but Dodd said she doesn’t want parents to take away children’s joy at amusement parks because of her son’s death.
“If you do decide to let them get on rides like that, double-check yourself,” she said. “Go up there and make sure the restraints are in place. Can your child ride? Does your child meet, I guess, the qualifications? You don’t want to rob the kids of enjoying (themselves), but then in the same breath … I don’t want this to happen to another family.”
Sampson called it “senseless” that a child lose their life trying to have fun.
In response to Tyre’s death, Florida Rep. Geraldine Thompson promised a forthcoming bill in the legislature named the “Tyre Sampson Bill” that will prevent accidents like this from happening.
Thompson said the bill will honor Tyre’s memory and “the promise that was ahead of him, by making sure that no other child comes to Central Florida for Spring Break and returns home in a coffin.”