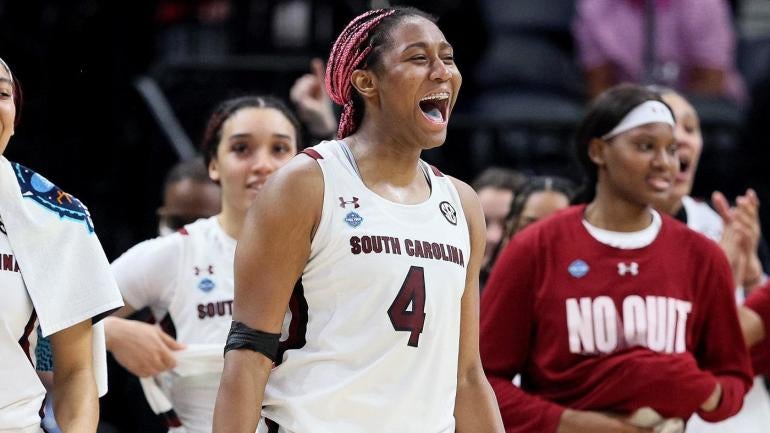 South Carolina continued its dominant run in the 2022 NCAA Women’s Basketball Tournament on Friday with a 72-59 win over Louisville in the Final Four. This was the fourth double-digit win in the tournament for the Gamecocks, who are on to the national championship game for the first time since 2017, when they won it all.

South Carolina jumped out to an early lead, and it seemed like things might get out of hand early. Louisville, however, shook off the early nerves, turned up the defense and surged in front early in the second quarter. But once South Carolina regained the lead on a Brea Beal layup with 4:03 remaining in the first half, the Gamecocks never surrendered it again. The Cardinals hung around in the second half, but it never looked like they were actually going to win.

Aliyah Boston proved why she was the Naismith Player of the Year with a dominant performance, finishing with 23 points, 18 rebounds and four assists. All four of South Carolina’s other starters also scored in double figures, and the Gamecocks assisted on 19 of 27 made field goals.

Emily Engstler led Louisville with 18 points, nine rebounds and four steals in defeat, but fouled out in the fourth quarter. Hailey Van Lith, who was averaging 21.5 points per game in the tournament, was held to just nine points and had as many turnovers (four) as made baskets.

Here are some key takeaways from the game:

Boston shows why she was named Naismith Player of the Year

Against Louisville on Friday night, she gave everyone a reminder of her brilliance with a truly dominant performance: 23 points, 18 rebounds and four assists on 8-of-12 from the field and 6-of-7 from the free throw line. Boston finished with half of her team’s rebounds, and either scored or assisted on a third of their points.

The Cardinals did their best to keep the ball out of Boston’s hands, and when she did catch it they sent multiple defenders her way. Boston, though, is no stranger to defensive pressure, and would not be denied. She kept working for deep post position, crashed the offensive glass over and over again and just gradually overwhelmed Louisville. A 3-pointer from the the top of the key with just over three minutes remaining was the icing on the cake.

“You see happy tears,” Boston said. “Happy tears right now after the Final Four. I’m just thanking God because we have one more game, Holly, and we’re not going home.”

On Louisville’s second possession of the game, Hailey Van Lith took the ball at the top of the key and tried to drive past Brea Beal. She got nowhere, and was called for a travel as she tried to pass the ball. A minute later, Van Lith caught the ball on the block, turned, faced up Beal and tried to shoot a jumper that was swiftly rejected.

Those two plays set the tone for the game, as South Carolina’s size and athleticism on the defensive end made things extremely difficult for Louisville. The Cardinals were held to 42.9 percent shooting from the field, made just one 3-pointer and turned the ball over 15 times.

Van Lith, in particular, had a very difficult night scoring the ball. Coming into the Final Four, she was Louisville’s leading scorer at 21.5 points per game on 47 percent shooting. But at just 5-foot-7 she was largely unable to deal with Beal and all of the size South Carolina could throw her way. She finished with nine points and had as many turnovers (four) as made field goals.