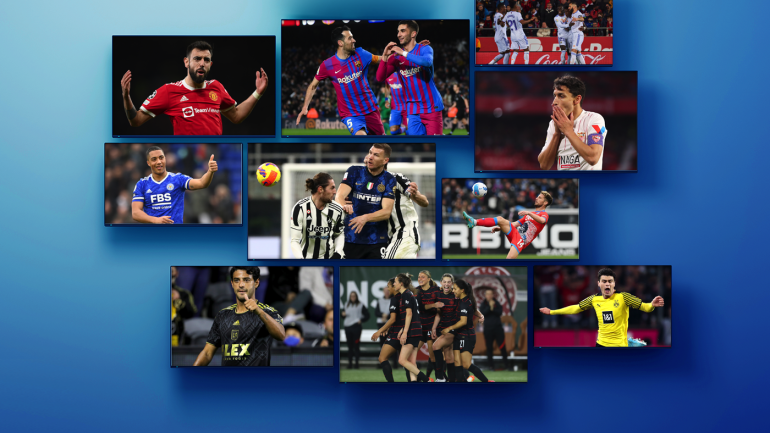 While World Cup Qualifying and the draw for the World Cup took center stage, this weekend club soccer returns. Strap in for NWSL Challenge Cup action but it doesn’t stop there with Juventus and Inter Milan coming together for a top-four clash in Italy. Manchester United will hope to keep their own Champions League hopes alive while Orlando City’s defense will have a tough test facing Los Angeles FC.

Let’s break down the top matches to watch this weekend.

Why watch: Two teams that are underperforming meet with a chance to get a leg up on their seasons. Manchester United will hope that Bruno Fernandes and Cristiano Ronaldo will be able to bring their form that saw Portugal book a World Cup spot into this one. Brenden Rodgers, meanwhile, just wants to have healthy players available. Wesley Fofana could mark his return which would provide a large boost to the defense that needs help in the worst way.

Why watch: The top teams in Group B will square off as they’re also coming off of victories during which they both scored three goals. As each team is expected to be one of the best in NWSL this season, it’s a can’t-miss affair. Sophia Smith is the joint top scorer and the Thorns will look to her again in this one. Can the Reign’s new-look defense come up with an answer?

Why watch: The battle to keep Real Betis out of the Champions League is underway at Camp Nou on Sunday. Both Barcelona and Sevilla should be comfortably in the top four but with no chance of catching Real Madrid in first place, these are now games to begin testing out ideas against other top sides. Barcelona have surged in a big way under Xavi while Sevilla have been adept at eking out draws. Can Pierre-Emerick Aubameyang lead the line through Sevilla’s defense?

Why watch: Orlando will have quite the task stopping LAFC who are the second-leading scorers in MLS with 10 goals. Pedro Gallese is one of the top goalkeepers in the league and will have extra confidence after leading Peru to a World Cup playoff in order to stop Carlos Vela from finding the back of the net. This will also be quite a test for Orlando’s new-look attack which has struggled to get things going to start the season.

Why watch: Don’t look now but Juventus are only seven points off of the top of Serie A. While they still have plenty of work to do, getting points off of Inter Milan would go a long way for Max Allegri to salvage something from this season. Their last meeting ended in a draw and both could use a win badly here this time around. Will Inter be able to breach Juventus’ defense that has only allowed nine goals at home in league play?