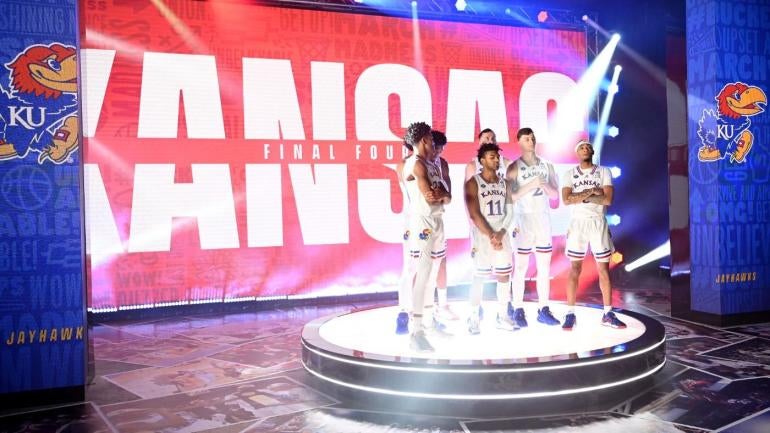 Saturday’s Final Four matchup between No. 1 seed Kansas and No. 2 seed Villanova may be viewed by some as an undercard to the night’s second game between No. 2 seed Duke and No. 8 seed North Carolina, but if that’s the case, then it’s an unusually compelling undercard. The Wildcats and Jayhawks have combined to win three national titles since 2008, and each of these historically strong programs have their sights set on adding another title to their tally.It will be a contrast of styles between the high-flying Jayhawks, who thrive in transition, and the methodical Wildcats, who grind opponents down with their flawless execution. Whoever dictates the game’s pace should have an edge, especially considering Villanova’s depth issues. When starting shooting guard Justin Moore exited Villanova’s Elite Eight victory over Houston last weekend with an Achilles injury, it left the Wildcats with just five players who have averaged 10 or more minutes per game this season.

However, those five are each juniors and seniors who have banded together to help Villanova win 14 of its past 15 games. Kanas is deep by comparison, and if the Jayhawks are able to get running in transition or to create foul trouble by Villanova, they should have an edge. Between point guard Remy Martin and star wing Ochai Agbaji, KU has a couple of players capable of taking over a game with their offensive acumen.

With two storied programs battling it out for a spot in the national championship game, the matchup between Kansas and Villanova could be a thriller as the 2022 Final Four tips off in style from New Orleans.

How to watch Kansas vs. Villanova

Kansas vs. Villanova: Need to Knows

About the Jayhawks: The loss of the 2020 NCAA Tournament is not a primary motivation for Kansas, but it’s not lost on anyone around the program that Self and the Jayhawks had the best team in the country at the time that the tournament was canceled because of the COVID-19 pandemic. Agbaji, David McCormack and Christian Braun were all part of that team and in this tournament have seen the bracket break their way at nearly every turn. Kansas is favored to make the national championship game and if they perform as oddsmakers expect it will set up a massive blue-blood title game against either Duke or North Carolina. If the Jayhawks get there the expectation will be they can win it, and cut down nets for the second time under Self and just the fourth time in the history of this storied program. — Chip Patterson

About the Wildcats: The word “attitude” is the slogan posted all over the Villanova facility and it’s represented in how the Wildcats do simply bring a more consistent and level approach than your average college basketball team. It’s a team that knows its system, and more specifically its roles in the system, as well as anyone in the country and that is how Villanova has been able to be so successful in the big dance over these last six tournaments. The loss of Justin Moore is undeniably going to change the math on how Villanova takes care of business, but Jay Wright has all week to put in a new game plan specifically for this weekend and there’s not another team I trust more to receive and implement such changes than the Wildcats.  — Patterson

It’s impossible to boil down any matchup to one specific injury or facet of the game … in most cases. However, it may just be this simple: Villanova, already thin on depth, is even more razor-thin after losing second-leading scorer and minutes leader Justin Moore to an Achilles injury in the Elite Eight. KU has the depth advantage, and it’s pretty close to a draw in terms of talent. Maybe Caleb Daniels steps up for Nova and Jay Wright rides five or six guys for 35+ minutes with success, but I’m skeptical the injury doesn’t tilt this one heavily in favor of the Jayhawks. Kyle Boone’s Pick: Kansas -4.5

Who will win every college basketball game, and which teams will sink your bankroll? Visit SportsLine now to see how to pick the spread, money, line, and over-under in each tournament game, all from the model that’s up almost $1,500 on top-rated college basketball picks and simulates every possession 10,000 times.