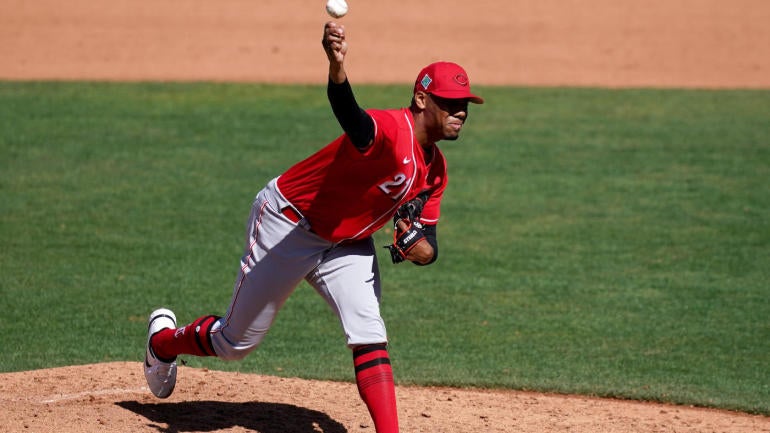 After struggling to realize his middle-of-the-lineup potential his first two seasons, Guerrero had a 2021 Fantasy baseball ADP outside the top 50 and the model predicted he’d outperform that position significantly. The result: Guerrero finished second in AL MVP voting with 48 home runs and 111 RBIs while slashing .311/.401/.601. Anybody who followed its advice and picked up Guerrero in their Fantasy baseball drafts received a top-10 talent for a fourth or fifth-round price.

The SportsLine model is engineered by the same people who powered projections for all three major Fantasy sites. And that same group is sharing its 2022 Fantasy baseball rankings and cheat sheets over at SportsLine, helping you find Fantasy baseball sleepers, breakouts and busts long before your competition. Their cheat sheets, available for leagues on many major sites, are updated multiple times every day.

One of the 2022 Fantasy baseball breakouts the model is projecting: Reds starting pitcher Hunter Greene. A consensus top 50 MLB prospect, Greene has earned a spot in Cincinnati’s starting rotation this season, and the No. 2 overall pick in the 2017 MLB Draft is scheduled to take the ball for his first MLB start on April 10 when the Reds take on the defending World Series champion Atlanta Braves.

Greene overcame some massive disruptions in his career, as he missed the entire 2019 season after undergoing Tommy John surgery and then the 2020 minor league season was cancelled because of the coronavirus pandemic. But Greene put together a strong season across double-A and triple-A in his return to action, posting a 3.30 ERA with 139 strikeouts over 106 1/3 innings in 2021. Greene has an 80-grade fastball that regularly hits triple-digits and also boasts three above average secondary offerings. That’s a big reason why the model ranks the rookie ahead of established veterans like Jordan Montgomery and Chris Sale.

SportsLine’s Fantasy baseball rankings 2022 are also high on Tigers center fielder Riley Greene. He got hot in Double-A Erie last year, earning a promotion to Triple-A Toledo. Greene hit four home runs with 12 RBI in his final six games in Erie and is considered one of the top prospects in baseball. He has already hit a pair of home runs during Spring Training, batting .333 in his first 15 at bats.

Greene is on track to make Detroit’s Opening Day roster, according to MLB Network’s Jon Morosi. The 21-year-old is starting to move up in most drafts, but there is still plenty of value to be had. SportsLine’s model has Greene rated ahead of Jarred Kelenic and Kevin Kiermaier, but he is being drafted behind both center fielders.

SportsLine is also high on a surprising starting pitcher who lands in the top five of its positional rankings. This player is barely going off the board in the top 60 picks, but is projected to outperform starters such as Max Scherzer, Corbin Burnes and Shane Bieber. This pick could be the difference in winning your league or going home with nothing. You can only see who it is here.

So which 2022 Fantasy breakouts should you target in your upcoming drafts? Visit SportsLine now to get 2022 Fantasy baseball rankings for every single position, all from the model that called Vlad Guerrero Jr.’s big season, and find out.