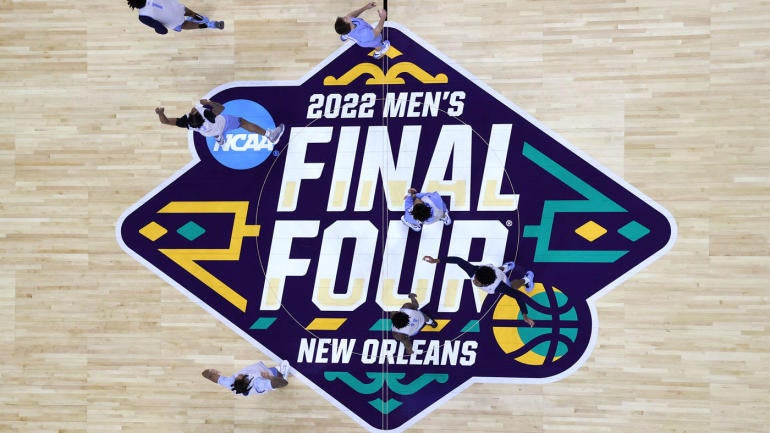 The 2022 NCAA Tournament delivered historic upsets and millions of busted brackets, but there’s nothing Cinderella about the programs and matchups in the Final Four on Saturday night. Kansas, Villanova, Duke and North Carolina have combined for 61 Final Four appearances and 17 national championships, including the winners in seven of the last 13 title games. It’s a blue-blood Final Four field with programs whose reach and recognition are wide-ranging, making Saturday night one of the most-anticipated evenings in the history of college basketball.

The four programs even have some history against each other. Kansas and Villanova played in the NCAA Tournament in 2008, 2016 and 2018, with the most recent meeting coming in the Final Four and the winner going on to claim the national championship in all instances. Duke beat Kansas for Mike Krzyzewski’s first national championship back in 1991. Villanova beat Duke on the way to Jay Wright’s first Final Four and then defeated North Carolina at the buzzer to claim Wright’s first title with the program. The only programs who don’t have NCAA Tournament history are the two who know each other best: the Tobacco Road rivals of Duke and North Carolina.

No. 1 seed Kansas and No. 2 seed Villanova will get the historic proceedings started in the 6:09 p.m. ET tipoff from New Orleans, rematching the national semifinal from San Antonio four years ago. After Game 1, at approximately 8:49 p.m., No. 2 seed Duke will play No. 8 seed North Carolina. Mike Krzyzewski’s retirement tour has been one of the big draws for sports fans, and now the Blue Devils’ dream season will be on the line against their biggest rival. When you consider the history of both of these programs in the Final Four and the gravity of where both Duke and North Carolina are in this moment — the Blue Devils finishing out Coach K’s last season while North Carolina has made the Final Four in Year 1 with Hubert Davis — the stage could not be bigger.

You can see why fans are so excited to watch and stream this Final Four, because that’s not half of what you should be on the lookout for on Saturday night. Let’s get to the big storylines for the national semifinals this weekend.

Duke and North Carolina have played 257 times but never in the NCAA Tournament, so to have this meeting come not only in the Final Four but with all the context of this season brings historic weight to the occasion. Krzyzewski and the Blue Devils hoped to finish the season here with a talent-rich roster of future NBA talent that started the year ranked in the top 10, reached No. 1 in the AP Top 25 poll and won the program’s first regular season ACC crown since 2010. But along the path to a No. 2 seed, Duke did have some setbacks, none more notable than North Carolina’s 94-81 win in Coach K’s final game inside Cameron Indoor Stadium.

Publicly, the Duke players have avoided making strong connections between that loss and Saturday’s national semifinal. It’s been a very business-like the approach by the Blue Devils — one that differs greatly from the passion that’s defined the Duke-North Carolina rivalry during Coach K’s time in Durham. North Carolina beating Duke in Cameron on March 5 was just the latest in a long string of iconic moments — we’ve collected some of our favorites for you in advance of the game — in a rivalry that’s up there with best not just in the college basketball but all of American team sports. Other rivalries have already had their postseason moment, but until now, Duke-North Carolina has remained within the friendly confines of the ACC regular season and conference tournament. Now it’s happening at the Final Four with a wide-ranging audience and a national championship on the line. No matter what happens, Saturday night’s game will be a historic moment in the rivalry.

Outside of the four wins themselves, no aspect of the Elite Eight had more of an impact on Saturday’s national semifinals than Justin Moore’s injury in the final minute of Villanova’s 50-44 win against Houston in the South Regional final. Moore suffered an Achilles injury and was ruled out the day after the game with Wildcats coach Jay Wright noting the significance in losing a team captain, the second-leading scorer and “one of the best rebounding guards” in his time at Villanova.

Now that Wright and the Wildcats are in New Orleans, the message has been clear: they’ve got to adjust the way they play with Moore out of the lineup. Villanova already had a thin rotation of about six players, so even losing one is going to mean more responsibility for players who haven’t been in these spots before. Look for Chris Arcidiacano and possibly Bryan Antoine to be X-factors with more minutes, but Wright also had to adjust the many ways Moore plays into out-of-bounds situations, press-break and other sets that will be key to getting past a strong Kansas side.

Lone No. 1 seed somehow under the radar

The Duke-North Carolina showdown is taking up a ton of oxygen heading into the Final Four, and Villanova’s two national championships in the last five tournaments makes it easy to focus on the Wildcats and their injury concerns. Somehow, the winningest program in the history of Division I men’s college basketball is the least discussed participant in the Blue Blood Final Four, and on top of that, the Jayhawks are the only No. 1 seed left in this tournament!

But Kansas knows this isn’t a popularity contest, and being below-the-fold in terms of pre-Final Four hype means nothing for their chances of winning a national championship. The oddsmakers do have the Jayhawks with the second-best odds to win it all (+180), listed by a narrow margin behind Duke (+155) at the time of this writing. Bill Self’s group is experienced — four seniors, a junior and two sophomores make up the seven-man rotation — and has its own unique motivations after seeing the 2020 NCAA Tournament canceled when Kansas had the best team in the country. With multiple players from that team here in the Final Four, including 2022 Big 12 Player of the Year Ocahi Agbaji, there’s an opportunity to win the program’s fourth national championship, an elusive accomplishment for the Jayhawks over the last decade.