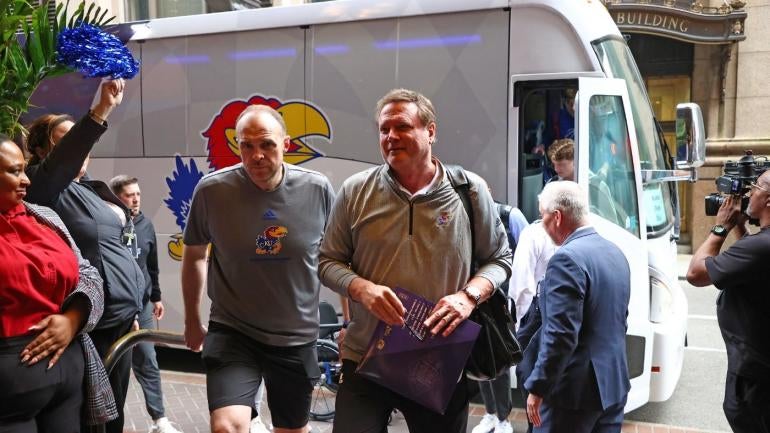 NEW ORLEANS – The boys on the bus pulled out of the Xavier University Convocation Center at 10:30 Friday morning, the day’s work essentially done.

“Hay’s in the barn,” Kansas Coach Bill Self proclaimed after his team’s off-site practice prior to the Final Four.

For the short 10-minute ride to the Caesars Superdome, the boys – in this case Kansas basketball – had time to contemplate what they had accomplished. Self had somehow nursed a team to the Final Four that was defensively deficient for much of the season – by his standards. These Jayhawks were never ranked No. 1. But in a blue-blood Final Four, they have the field’s only first-team All-American (Ochai Agbaji).

The bus was mostly silent. What else was there to say at this point? While the No. 1-seeded Jayhawks are the team to beat by many in this Final Four and are 4.5-point favorites over Villanova, Saturday’s opponent in the Final Four, anything can happen. In fact, it already has.

Like in 2018 when a talented Kansas team was clubbed by Villanova in the Final Four.

“I get tics whenever I think about it,” Self said of that 95-79 national semifinal loss at the hands of the Wildcats, who went on to win the title two days later. “I remember we started off the game off on a 2-0 run. That was about the highlight of that particular game.”

These Jayhawks have worked on this version of Villanova like they’re trying to rid themselves of that four-year old memory. The Jayhawks must defeat Nova’s post-up guards to win but as of this writing there has been no answer.

“We can’t replicate ’em [in practice],” Self said from the front right seat of the team bus.

At that point, the coach looked a row behind him to assistant Norm Roberts.

“I guess whoever is in charge of our guards, I guess [is responsible],” Self chided. “Norm, who do you work with?”

It’s hard to differentiate between blue bloods in this Final Four but let’s try. Agbaji is a reason to still believe there is some purity left in college athletics. The Kansas City, Missouri, product had no Power Five offers the second semester of his senior year. Self didn’t exactly take a chance but it was one other teams certainly didn’t.

Now Agbaji is an All-American, Big 12 Player of the Year and a national player of the year candidate. He hasn’t ruled the court lately (13 points, 41% shooting his last five games) but all of it can be wrapped around Self’s coaching job. With his star slightly off, the defense has picked up and super-sub Remy Martin has emerged.

“Coach Self kind of forces it on you,” guard Christian Braun said of the defense that has held opponents to 34% shooting in the tournament.

But it’s hard to remember another player with Agbaji’s arc – from nothing recruit to possible national player of the year.

Self went out of his way Thursday to aggregate his star’s accomplishments.

Manning’s Jayhawks didn’t win the Big Eight in 1988 but eventually won it all only 30 miles from Kansas City’s then-Kemper Arena. Manning remains a Mount Rushmore Jayhawk. Agbaji? To be determined.

Self laid that best-year eval on Agbaji just moments after the regional final win last week against Miami. In that game the senior guard arguably had the best game of the postseason with 22 points, five rebounds and four assists.

“I would say how humble he is,” Braun said. “Yeah, he works hard and puts a lot of shots up in the gym all day … He deflects all his awards, doesn’t want to talk about himself even in the locker room.

The guy gets 37 against Texas Tech [Jan. 24] and talked about everybody else besides him. We’re all proud of him. Everybody on the team, nobody looked around saying, ‘This guy is shooting all the shots.’ “

There have been others who went from relatively obscure late-bloomer status to stardom. Self came up with former University of New Orleans star Ervin Johnson. More recently Kansas guard Frank Mason became the 2017 national player of the year.

“Och will make the big show [NBA],” Self said. “That’s all you wanted. That will make for a great story.”

While New Orleans signifies a coming out for college basketball this weekend, it is a renewal for Kansas. The Jayhawks may have been the No. 1 overall seed two years ago when the tournament was canceled. Last year KU had to pull out of the Big 12 Tournament because of COVID-19 protocols. David McCormack and Tristan Enaruna (since transferred to Iowa State) were out with the virus the week before.

Consequently, Kansas was muscled out of the tournament by USC in the second round, the Jayhawks’ worst tournament loss  (34 points).

“Last year, it wasn’t the same,” Self said. “The way that year ended for us, we were playing our best ball of the year … [COVID-19] kind of annihilated us.”

Sixth-year super senior Mitch Lightfoot has been around long enough to play on Kansas’ last Final Four team in 2018. Talk about experience. He will leave with two Final Fours and two degrees.

Worth the wait for a career bench player? Lightfoot departed that quiet bus with the rest of his teammates. He did not stay quiet for long.

“It’s not going to be hard, but it’s going to be worth it,” Lightfoot said when asked how his current self would address his younger self. “I get to play against All-Americans every day and for a hall of fame coach, but it’s worth it … I pinch myself sometimes that I get to do this day in and day out.”

August 19, 2022
Manage Cookie Consent
To provide the best experiences, we use technologies like cookies to store and/or access device information. Consenting to these technologies will allow us to process data such as browsing behavior or unique IDs on this site. Not consenting or withdrawing consent, may adversely affect certain features and functions.
Manage options Manage services Manage vendors Read more about these purposes
View preferences
{title} {title} {title}