Seven people were injured, including two critically, when a possible tornado touched down at 4 a.m. in Springdale, a city in northwest Arkansas, Mayor Doug Sprouse said in a Facebook post.
“Many residents have been displaced from their homes and numerous businesses have reported significant damages,” he said, adding there have been no reported deaths. 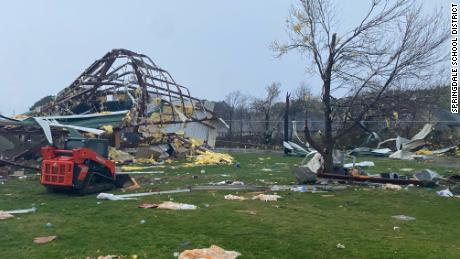 The southeastern part of the city sustained significant damage, local authorities said. They announced road closures following reports of downed power lines, trees and traffic lights.
Click here for live updates
Video obtained from CNN affiliate KHBS/KHOG showed flattened buildings, roof damage and yards littered with storm debris. At George Elementary School, the gym was destroyed and the kitchen and cafeteria were severely damaged, the Springdale School District said. There were no students inside the school at the time, Gov. Asa Hutchinson said on Twitter. 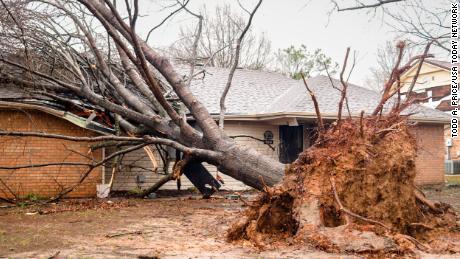 The damage stemmed from a line of storms that raced across eastern Oklahoma and western Arkansas and intensified throughout the day. By late afternoon, at least 38 million people were still at risk for life-threatening extreme weather, largely across the Southeast.
Severe thunderstorms were expected later in the day and into the night over parts of the lower Mississippi Valley and the mid-South, into the central Gulf Coast states, the Storm Prediction Center (SPC) said.
The rainfall could lead to flash flooding over parts of Louisiana and Mississippi, the Weather Prediction Center said.
As the storms rolled through the region, more than 140,000 customers were left without power Wednesday evening, with the majority in Mississippi, Alabama and Tennessee, according to PowerOutage.us.

The greatest concern is for tornadoes

As of Wednesday afternoon, tornadoes were the greatest concern from the storms — with the possibility of twisters of at least an EF-2 on the Enhanced Fujita Scale — as well as damaging wind gusts, the SPC said. EF-2 tornadoes can cause considerable damage, ripping roofs from houses and destroying mobile homes.
The SPC issued at least seven tornado watches Wednesday. Those that remained active included a tornado watch issued until 10 p.m. CDT for parts of Kentucky, Illinois, Missouri and Indiana, an area that includes the town of Mayfield, Kentucky that was devastated by a tornado in December.
There was also a tornado watch across central Tennessee and much of Alabama until 1 a.m. CDT Thursday and another watch for southeast Mississippi, and parts of southern Alabama and the Florida Panhandle until 4 a.m. CDT.
Get ahead of the storm, sign up for weekly updates from CNN meteorologists
A moderate risk –– level 4 of 5 — for severe storms covered Mississippi and included portions of Arkansas, Louisiana, Alabama and Tennessee, and Florida. In addition to Jackson, cities like Memphis in Tennessee, Baton Rouge in Louisiana, and Mobile and Montgomery in Alabama are all in this risk category. 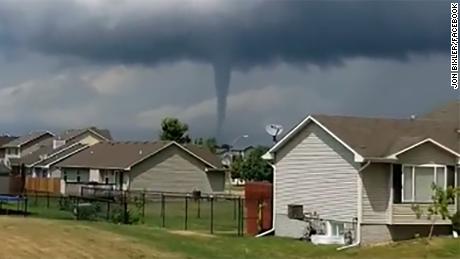 The bulk of the most vigorous activity is expected to become severe as it quickly crosses the Mississippi River into Mississippi, western Tennessee and Kentucky, the SPC said.
“We are expecting a long duration severe weather event today with damaging winds even before the storms arrive and destructive winds during the main event,” Logan Poole, a meteorologist with the NWS in Jackson, told CNN.
The extreme weather comes in a month that has seen near-record tornado activity in the US. One difference between this week’s storms and last week’s deadly tornado outbreak is how much more widespread the risk area is, how intense the winds will be and the longevity of damaging winds.

All across the South, winds are forecast to be strong ahead of the main line of storms which will have even stronger winds. Even before the storms approach, there could be damaging wind gusts of nearly 60 mph out of the south.
Residents in Sevier County, Tennessee, were placed under mandatory evacuation due to a brush fire fueled by high winds in Wears Valley/Shagbark areas, the county Emergency Management Agency said.
The blaze had torched at least 250 acres and at least one person has been injured, the agency said Wednesday afternoon.
High wind warnings are in effect ahead of the line of storms stretching from northwestern Tennessee to the Louisiana Gulf Coast.
“This will certainly be widespread and likely to affect a larger portion of our population,” the NWS in Jackson wrote. “Winds up to 80 mph, in addition to the gradient wind ahead of the line, will pose risks of downed trees and powerlines and result in power outages.
As the line of storm approaches, “Supercells are likely, with strong tornadoes possible,” the SPC said, “as well as particularly damaging outflow surges.”
The storm threat will continue through the evening hours and overnight, with storms hitting places like New Orleans, which is at a severe risk level 3 of 5, just about sunset.
As the storms make their way east across Alabama and the Florida Panhandle, they will begin to lose some of their potency before reaching places like Atlanta in the early morning hours.

A near-record March for tornadoes

As of Wednesday morning, the SPC had tallied at least 187 preliminary reports of tornadoes in March. This is more than 233% of normal and just four shy of the highest March tornado count in recorded history (191 in March 2021), according to CNN meteorologist Pedram Javaheri.
On average, March averages about 80 tornadoes across the country.
Though the March record may be broken in a few hours with Wednesday’s storms, another tornado record has been standing far longer. The nation is currently in the midst of its longest stretch without an EF-5 tornado, says Javaheri. “You would have to go back nearly a decade to May 20, 2013, for the last EF-5 in the country.”
Since that time, at least 11,322 tornadoes have touched down in the US, without a single one reaching the EF-5 threshold (200+ mph).
“The streak nearly came to an end in December 2021, amid the historic month that saw over 200 tornado reports,” Javaheri adds. “The December 10 western Kentucky tornado was rated an EF-4, with peak winds estimated around 190 mph, just 10 mph shy of an EF-5 tornado.”
“This is a streak we’ll hope to continue today.”