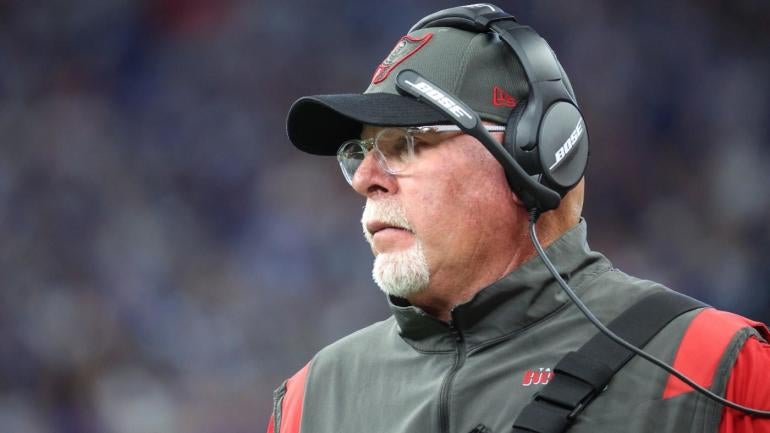 The latest chapter in what has been the wildest offseason in NFL history takes place in Tampa Bay. Buccaneers head coach Bruce Arians is retiring from coaching and will be moving into a front-office role as a Senior Football Consultant with the organization, the team announced. Defensive coordinator Todd Bowles has been elevated to head coach.

While this comes as the latest shocker to scroll across the NFL ticker, Arians told NBC Sports and the Los Angeles Times that he began thinking about making this move at the NFL Scouting Combine a month ago. He also thought about retirement following the Buccaneers’ Super Bowl LVI victory in February 2021. Of course, Arians instead elected to try to repeat this past season, and the Buccaneers were eliminated in the divisional round.

“I have spent most of the last 50 years of my life on the sidelines as a football coach in one form or another,” Arians said in his statement released by the team. “Today, I have made the decision to move from the sidelines into another role with the Buccaneers front office, assisting Jason Licht and his staff. I love football. I love the relationships, the strategy, the competition—everything. It has been one hell of a ride, but I know this is the right time for me to make this transition.”

Naturally, the timing of this retirement from coaching will cause many to speculate that it could have something to do with Tom Brady deciding to come out of retirement himself. There had been rumors that the pair’s relationship had soured over Brady’s tenure in Tampa Bay, but Arians noted that the two have a “great relationship off the field.” In fact, Brady deciding to unretire ultimately paved the way for this decision because Arians knew that the team would be competitive in his departure.

“Tom was kind of the key,” Arians told NBC Sports and the L.A Times. “When Tom decided to come back … and all of these guys back now, it’s the perfect timing for me just to go into the front office and still have the relationships that I love.”

Oh, and if you were wondering if Arians may pull a Tom Brady himself and try to come out of retirement at some point down the line, he effectively slammed that door shut saying: “This is it. I’m gonna be 70 in October. I just look forward to helping the Bucs because they’ve been so great to me and my family.”

Meanwhile, Bowles — who Adam Schefter of ESPN reports is now receiving a new five-year, head-coaching contract — was Arians’ recommended successor and is happy that he is able to hand over a stable roster as he ascends to head coach.

“Succession has always been huge for me,” Arians said. “With the organization in probably the best shape it’s been in its history, with Tom Brady coming back … I’d rather see Todd in position to be successful and not have to take some [crappy] job. I’m probably retiring next year anyway, in February. So, I control the narrative right now. I don’t control it next February because [if] Brady gets hurt, we go 10-7, and it’s an open interview for the job … I got 31 [coaches and their] families that depend on me. My wife is big on not letting all those families down.”

Bowles has been with the Buccaneers organization dating to 2019 when he was hired as the club’s defensive coordinator. Prior to that, he was the head coach of the New York Jets from 2015 to 2018. The 58-year-old’s hiring is set to be the fourth full-time minority coach hired by the Glazers, which is the most in NFL history.

As for Arians, the 69-year-old originally stepping into the NFL as a running backs coach for the Kansas City Chiefs in 1989. He’d then go on to make notable stops in Indianapolis where he worked as Peyton Manning‘s first quarterbacks coach, was the offensive coordinator for the Pittsburgh Steelers during the early days of Ben Roethlisberger, and most recently coaching Tom Brady en route to the quarterback’s record seventh Super Bowl title.

He ends his coaching career with an 80-48-1 record in the regular season to go along with a 6-3 mark in the playoffs.