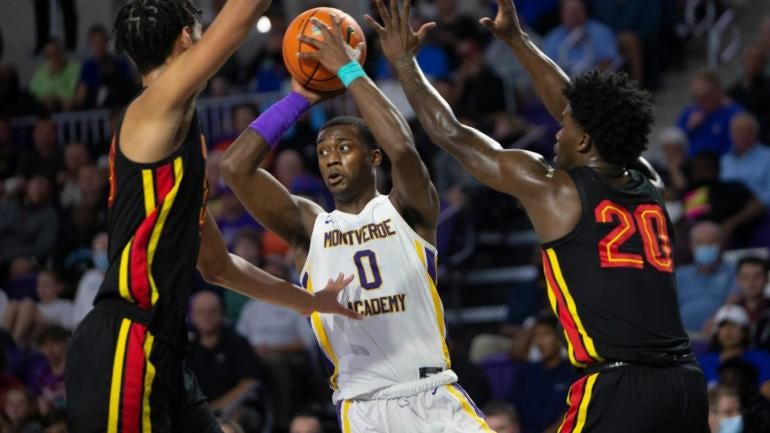 Duke basketball is going pretty well presently, with the Blue Devils set to play North Carolina in the Final Four Saturday, hoping to wrap up coach Mike Krzyzewski’s final year with a national championship. But the future looks bright too, with Duke recruits stealing the show at the 45th annual McDonald’s All-American Game Tuesday night.

The East team romped to a 105-81 victory, thanks in large part to game MVP and Duke signee Dariq Whitehead’s 13 points, seven rebounds and seven assists. Arguably his top competition for the MVP award came from future teammate Dereck Lively, who made all five of his shots to score 10 points, He also grabbed four rebounds and led all players with three blocked shots.

Mark Mitchell paced the West with 19 points, tying the East’s Cam Whitmore for the game-high, Mitchell, who scored those points on 8-of-13 shooting, is also headed to Duke.

All three are five-star prospects in Jon Scheyer’s first recruiting class, one ranked first nationally in the 247Sports Composite. Lively is the top-ranked overall prospect, while Whitehead is the No. 1 small forward and sits at No. 5 overall. Mitchell is the No. 3 power forward and No. 13 player in the nation.

The Razorbacks won a victory before the game even started by landing 6-foot-7 point guard Anthony Black on Monday. That inspired Arkansas coach Eric Musselman to post about his three McDonald’s All-Americans, with Black joining Nick Smith Jr. and Jordan Walsh.

Smith earned rave reviews for his play this week, and while his shot wasn’t falling on Tuesday — he made just four of his game-high 15 attempts and scored eight points — his athleticism and ability to create off the dribble were both on display.

Walsh took four shots, making one and making both his free throws; he finished with four points. And Black showed the way he can fill up a box score with four points, three rebounds, four assists and a steal in 17 minutes.

Together, Smith (No. 6 in the 247Sports Composite), Walsh (18) and Black (22) give Musselman three five-star players, and they represent three strong foundational points for the No. 2 class in the country, only behind Duke’s group.

The McDonald’s All-American Game is known mostly for its offense. But any Wildcat fans watching had to be encouraged by the defensive aptitude shown by Cason Wallace and Chris Livingston. Both players approached that side with intensity, and while Livingston might have had the better overall day (and his team won), Wallace’s intangibles and work on that end make him a valuable addition.

The Nos. 7 (Livingston) and 8 (Wallace) prospects in the 247Sports Composite may need to plug in immediately on the wings for Kellan Grady and the likely-to-depart TyTy Washington. And a willingness to grind defensively has always been a key to the door of John Calipari’s playing time.

Only an off night at the free throw line (1-for-7) likely kept Livingston from the game’s MVP award, as he scored 13 points and added six rebounds, five assists and blocked a shot. And while Wallace had a 3-for-10 night from the field limited Wallace’s own score, he still had seven points, five rebounds , six assists and a steal.

Of the four remaining players to score in double figures, two will ply their trade in the Big 12 this season, while a third is attending a school headed to the Big 12 in the near future.

Baylor‘s Keyonte George is among the most gifted scorers in the class, and he wasted little time getting up his 13 points, the second-best mark on the West team. He should square off in college against Texas-bound point guard Arterio Morris, who had 12 points and three assists for the East side. Morris was one of two future Longhorns in the game, along with Dillon Mitchell, while Kansas had three McDonald’s All-Americans with two playing in the game (Gradey Dick, Ernest Udeh) and one sitting out with a minor injury (MJ Rice).

UCLA signee Amari Bailey, the No. 2 overall player in the 247Sports Composite, scored 10 points and added six rebounds and two steals. Bailey could help soften the blow of any NBA early entries the Bruins might face this offseason.