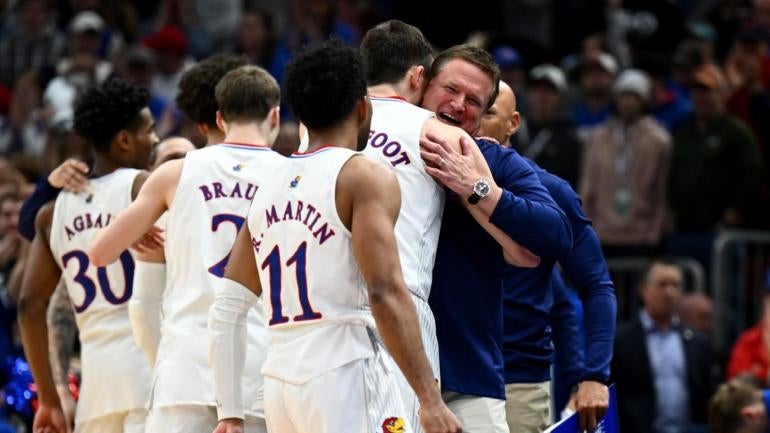 For more than four months, the Kansas Jayhawks, like every other Division I men’s basketball team, have been playing games, mostly twice a week, some at home, some on the road, some on neutral courts. Never once were they ranked No. 1 in the Associated Press Top 25 poll, the Coaches Poll or the CBS Sports Top 25 And 1. Never once were they No. 1 at KenPom.com. And yet there are, heading into the 2022 Final Four, as the only No. 1 seed remaining and just two wins away from what would be Bill Self’s second national title,

It’s a reminder of a few different things — most notably that Self, already a Naismith Memorial Hall of Famer at the age of 59, is an incredible basketball coach, one who has won 20 conference regular-season titles, 10 conference tournaments and now advanced to four Final Fours. But it’s also evidence that it’s not always a coach’s best teams that give him the best chance to win it all as much as it’s a coach’s great teams that move through the bracket with the kind of good fortune national champions sometimes enjoy.

Which is not to take away from what KU just did or might do.

Please don’t get it twisted.

My point is simply that you could reasonably argue this is neither one of Self’s five most-talented teams nor one of his five best teams, and yet it really might be the team that earns him a second national title. For starters, the 2008 team with Brandon Rush, Darrell Arthur, Mario Chalmers, Sherron Collins, Cole Aldrich, Russell Robinson, Sasha Kaun and Darnell Jackson was obviously better than this KU team. That’s the team with which Self won his first national title. And the 2010 team with Collins, Aldrich, Thomas Robinson, Tyshawn Taylor, Xavier Henry and Marcus and Markieff Morris was also probably better. That’s the team that got a No. 1 seed in the NCAA Tournament but was upset in the second round  by Northern Iowa.

It was also probably better than this KU team thanks to a roster headlined by Robinson, the Morris twins, Taylor, Josh Selby, Tyrel Reed and Brady Morningstar. That’s the team that got a No. 1 seed in the NCAA Tournament but was upset in the Elite Eight by VCU. (Shouts to Shaka Smart.) And the 2014 KU team with Joel Embiid, Andrew Wiggins, Perry Ellis, Wayne Seldon, Frank Mason and Tarik Black was certainly more talented than this KU team — but Embiid only played 20 games, and not at all in the NCAA Tournament. So those Jayhawks were upset in the Round of 32 by Stanford. (Shouts to the kid who cried in the crowd.)

It was also probably better than this KU team thanks to a roster headlined by with Ellis, Mason, Seldon, Devonte Graham and Landen Lucas. That’s the team that got a No. 1 seed in the NCAA Tournament but lost in the Elite Eight to Villanova, which went on to win the national championship. (Shouts to Kris Jenkins.) And the 2020 KU team with Devon Dotson, Udoka Azubuike, Ochai Agbaji, Marcus Garrett and Isaiah Moss was definitely better than this KU team. That’s the one that finished No. 1 at KenPom — but then the NCAA Tournament was canceled because of the COVID-19 pandemic. (Boo to COVID.)

So where does this rank among Self’s KU teams?

At this point, it doesn’t matter. Because, again, being the best isn’t always the key as much as being really good and catching some breaks is the key. As for those breaks, Kansas got to play a Creighton team missing two starters because of injuries in the Round of 32, a Providence team ranked outside of the top 30 in the Sweet 16, and a Miami team ranked outside of the top 40 at KenPom in the Elite Eight.

KU won those games by an average of 12.7 points.

Next up is a Final Four game against a Villanova team that just lost its second leading scorer and best perimeter defender (Justin Moore) to a torn Achilles in the Elite Eight. That’s heartbreaking for Villanova but another break for Kansas. No need to apologize, obviously. But sometimes things need to go your way to win a national title, and things are clearly going the Jayhawks’ way as this bracket unfolds. Kansas is a 4.5-point favorite Saturday against shorthanded Villanova.