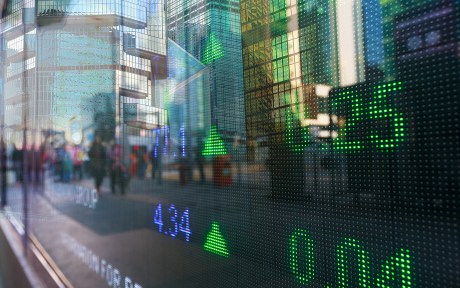 Riskier firms typically borrow at higher rates than safer firms because investors require compensation for taking on more risk. However, since 2009 this relationship has been turned on its head in the massive BBB corporate bond market, with risky BBB-rated firms borrowing at lower rates than their safer BBB-rated peers. The resulting risk materialized in an unprecedented wave of “fallen angels” (or firms downgraded below the BBB investment-grade threshold) at the onset of the COVID-19 pandemic. In this post, based on a related Staff Report, we claim that this anomaly has been driven by a combination of factors: a boost in investor demand for investment-grade bonds associated with the Federal Reserve’s quantitative easing (QE) and sluggish adjustment of credit ratings for risky BBB issuers.

The BBB segment of the corporate bond market has ballooned since the Global Financial Crisis, as shown by the chart below. The amount outstanding of BBB-rated corporate bonds has more than tripled since 2009 to account for more than half of all investment-grade debt in 2020, up from 33 percent in 2008. The growth of the BBB market has been particularly pronounced among issuers hovering just above the investment-grade threshold of BBB, firms at risk of becoming fallen angels upon a downgrade. Notably, these prospective fallen angels experienced a substantial reduction in their bond financing costs even as their balance sheets became more fragile. 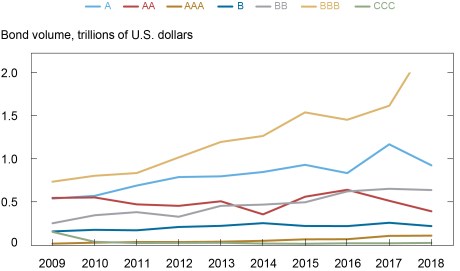 Note: This chart shows the evolution of the stock outstanding of corporate bonds, grouped by issuer rating category.

The chart below shows the bond spread between downgrade-vulnerable and non-downgrade-vulnerable issuers by rating (see the associated working paper for a formal definition of downgrade vulnerability). Prospective fallen angels paid 13 basis points less to borrow in the corporate bond market as compared with safer BBB-rated issuers. If prospective fallen angels had been downgraded below the BBB rating, their funding costs would have risen by around $300 billion over the period from 2009 to 2019, according to our back-of-the-envelope calculations. This phenomenon is unique to BBB-rated issuers and particularly pronounced from 2013 to 2016, a period coinciding with a rapid, QE-driven expansion of the Federal Reserve’s balance sheet. We do not observe a similar subsidy in the high-yield corporate bond market (for corporate bonds rated below BBB), in equity markets, or in the corporate loan market. 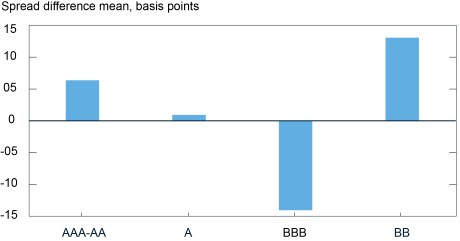 Note: This chart shows bond spreads between downgrade-vulnerable and safer firms within each rating category from 2009 to 2019.

The emergence of the prospective fallen angel subsidy amid the Fed’s elevated QE purchases isn’t a coincidence. Investors with the greatest exposure to QE (through their holdings of securities that were eventually purchased by the Federal Reserve) increased their demand for bonds issued by prospective fallen angels, lowering the financing costs of those firms. Investors that tend to hold investment-grade bonds, such as insurance companies, had a more pronounced surge in QE-induced demand. Prospective fallen angels met this demand by issuing bonds, largely to finance mergers and acquisitions (M&A).

M&A activity was particularly pronounced for prospective fallen angels and served two purposes. It allowed prospective fallen angels to delay downgrades and helped them grow their market share. Both of these forces further increased the demand for bonds issued by prospective fallen angels. In our working paper, we document that following M&A activity, there is a significant divergence between the “fundamental” rating and the actual rating, defined as the difference between an issuer’s credit rating as implied by its balance sheet and income statement (through the so-called Z”-score) and its observed credit rating. M&A announcements are usually accompanied by rosy forecasts about synergies and growth, and, more importantly, a promise to reduce the debt taken on to finance the acquisition. Data indicate that most of these projections were, ex-post, not realized.

Prospective Fallen Angels Doubled Their Market Share from 2013 to 2019 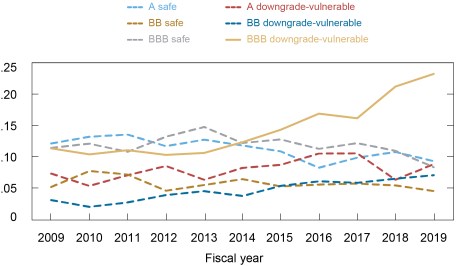 Note: This chart shows the share of sales by all firms in Compustat, grouped by rating and downgrade-vulnerability.

Downgrades in 2020:Q1 Were Five Times Larger than Those during the Entire Global Financial Crisis 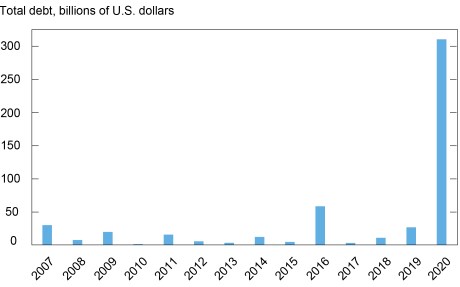 Note: This chart shows the debt of prospective fallen angels downgraded, at an annual frequency from 2007 to 2020.

Lessons for the Future

In many respects, the growth of risky investment-grade corporate bonds may be a desired outcome of monetary policy, as investors demand riskier assets in response to QE. Our findings suggest that market frictions—such as the reliance on credit ratings and desire for higher yields by investment-grade investors—interact with stimulus policies, contributing to capital misallocation and the build-up of vulnerabilities in the corporate sector. These important side effects may need to be factored in when considering the design of QE programs in the future.

Viral V. Acharya is a professor of finance at New York University Stern School of Business.

Ryan Banerjee is a principal economist at the Bank for International Settlements.

Matteo Crosignani is a senior economist in the Federal Reserve Bank of New York’s Research and Statistics Group.

Tim Eisert is an associate professor of finance at Erasmus University.

Renée Spigt is a Ph.D. candidate at Erasmus University.

How to cite this post:
Viral V. Acharya, Ryan Banerjee, Matteo Crosignani, Tim Eisert, and Renée Spigt, “The Making of Fallen Angels—and What QE and Credit Rating Agencies Have to Do with It,” Federal Reserve Bank of New York Liberty Street Economics, February 16, 2022, https://libertystreeteconomics.newyorkfed.org/2022/02/the-making-of-fallen-angels-and-what-qe-and-credit-rating-agencies-have-to-do-with-it/.