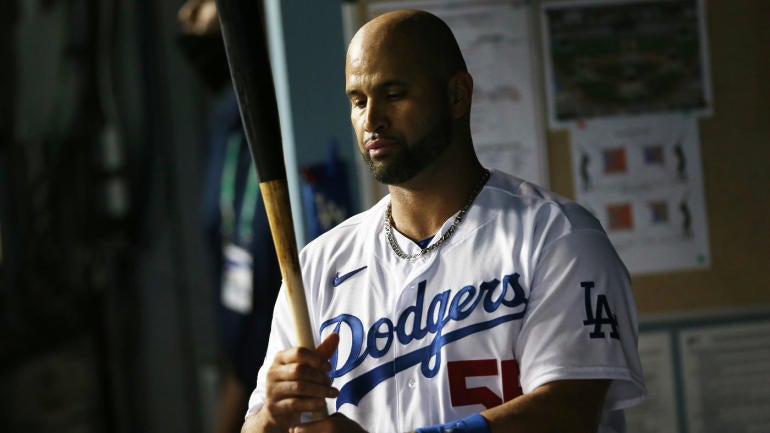 The St. Louis Cardinals and future Hall of Famer Albert Pujols are discussing a reunion and talks have picked up, reports Katie Woo of The Athletic. Woo explains that Pujols would not be an everyday player with St. Louis, and would instead serve as a righty bench bat and part-time starter.

The National League is adopting the designated hitter this season. Pujols won’t unseat Paul Goldschmidt at first base, but he could share DH at-bats with Paul DeJong, Edmundo Sosa, and the recently signed Corey Dickerson. Top prospect Nolan Gorman could be a factor at some point as well. Point is, Pujols will have to accept a reduced role to return to St. Louis.

For Pujols, a return to St. Louis would also give him a chance to join the 700-homer club. He is currently fifth on the all-time home run list and climbing into sole possession of third place this season is unlikely, but not completely impossible:

Cardinals stalwarts Yadier Molina and Adam Wainwright have said this will be their final season, and Pujols joining them for one big farewell tour would be a wonderful baseball story. Of course, St. Louis should prioritize moves that help them win, not nostalgia. Pujols has limited value these days, though his ability punish lefties is a useful skill.

Last year the Cardinals went 90-72 and lost the NL Wild Card Game to the Dodgers. Manager Mike Shildt was fired after the season, and new skipper Oliver Marmol has indicated he wants a flexible roster rather than strict platoons.

St. Louis will open the 2022 regular season at home against the Pirates on April 7.

Lightning force a Game 6: What we learned as the series heads back to Tampa

Lightning force a Game 6: What we learned as the series heads back to Tampa

June 25, 2022
Manage Cookie Consent
To provide the best experiences, we use technologies like cookies to store and/or access device information. Consenting to these technologies will allow us to process data such as browsing behavior or unique IDs on this site. Not consenting or withdrawing consent, may adversely affect certain features and functions.
Manage options Manage services Manage vendors Read more about these purposes
View preferences
{title} {title} {title}