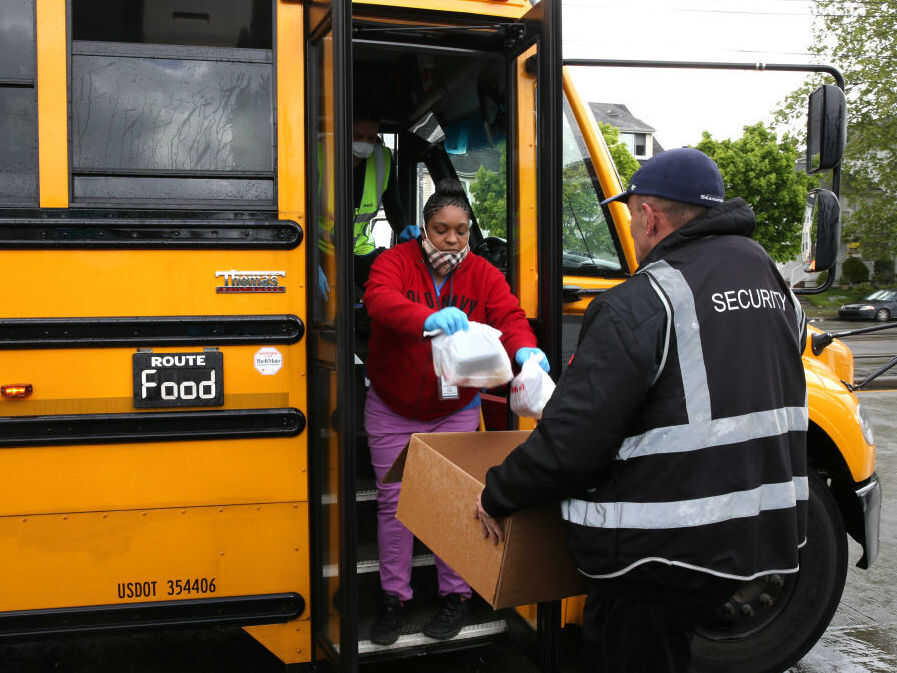 Nutritionist Shaunté Fields (center) and bus driver Treva White (behind Fields, on the bus) deliver meals to children and their families in Seattle. When schools closed because of COVID-19, Seattle Public Schools began distributing breakfast and lunch to students through a network of 26 school sites and 43 bus routes five days a week. Karen Ducey/Getty Images hide caption

When schools pivoted to virtual learning early in the pandemic, the National School Lunch Program was thrown into chaos. Millions of children rely on school meals to keep hunger at bay, so school nutrition directors scrambled to adopt new, creative ways to distribute food to families. Some of these changes were improvements on the status quo, they say.

And as part of pandemic relief legislation, the federal Food and Nutrition services agency waived the requirement that schools serve meals in a group setting, increased school-year reimbursement rates to summer levels for school food programs and granted more flexibility in how food is prepared and packaged.

“It was a game changer,” says Donna Martin, who heads the school nutrition program in Burke County, Ga., a rural district that has a high rate of food insecurity.

Schools started preparing bag lunches and other grab-and-go options for parents to pick up at school and take home for their kids. They even used buses to bring meals, sometimes days’ worth, to pickup spots in different neighborhoods.

For Martin, the new flexibility meant that instead of preparing individual meals, as is usually required, she used her budget to go all in on healthy ingredients, and she started sending boxes of fresh food home to families, enough for several days.

“We were able to give whole heads of broccoli and whole heads of cauliflower and unusual fruits and vegetables,” Martin says of her program. The economy of scale from bulk buying these ingredients was a win. “We could give much better food,” she says.

Some pandemic innovations depend on expiring funds

Even though kids are back in school, Martin says many of her pandemic innovations are worth keeping. But the waivers that gave her that flexibility — and a boost in federal funds — are set to expire at the end of June.

Health policy experts say the flexibility has served children well. “When you improve the ability for the country to deliver food to children, to families, you improve the health outcomes of Americans,” says physician Ezekiel Emanuel, co-director of the Healthcare Transformation Institute at the University of Pennsylvania.

The pandemic shone a spotlight on the links between poor nutrition and chronic illnesses such as diabetes and obesity, as well as the risk of serious illness from COVID-19, so Emanuel says initiatives that make child nutrition programs more efficient should continue.

Martin says the expiration of the waivers and increased funding “is going to be a disaster for my program.”

For instance, with the summer coming up and a return to the rules that require kids to be served meals in group settings, much of her budget will be used on transportation costs instead of healthy ingredients — sending buses around to kids’ homes where they will be required to eat on the bus in order to comply with the rules that kids are fed in congregate settings.

“Our county is so rural that the kids do not have a way to get to the schools to eat at the schools so the buses have to take the food to them,” says Martin. She describes the effect on her program as “catastrophic.”

Bus drivers are in short supply around the country, gas prices have spiked, and inflation has led to higher food prices. “We’re going to have to really cut back on the quality of the meals,” Martin says.

School food directors and nutrition advocates lobbied lawmakers on Capitol Hill to include an extension of the waivers in the omnibus spending bill that President Biden signed last week. But that effort was unsuccessful.

Because of the failure to extend the nutrition waivers, “many schools and community organizations will have to stop or scale back meals over the summer. … This puts children at risk of missing more than 95 million meals this summer alone,” Davis says. She says her organization will keep working toward a solution.

For now, the U.S. Department of Agriculture has its hands tied. Agriculture Secretary Tom Vilsack does not have the power to renew waivers that are currently in place. That power rests with Congress.

“We are disappointed that we weren’t able to secure needed resources and flexibilities to help school meals and summer feeding programs deal with the serious challenges they are facing,” a spokesperson for the USDA told NPR.

As schools try to return to many pre-pandemic operations, feeding children remains a struggle, according to a survey of school nutrition leaders. “Labor shortages and supply chain disruptions have pushed school nutrition professionals to a breaking point,” according to the School Nutrition Association’s position paper.

With rising food and labor prices, schools say they can’t afford to cover the costs of producing school meals if the federal reimbursement rate reverts back to the pre-pandemic rates.

“Returning to [prior] National School Lunch Program reimbursement rates would increase meal program losses and cut into education budgets, impeding efforts to meet the needs of students and jeopardizing progress in school nutrition programs,” according to the association.

When the waivers were first issued, they weren’t meant to be permanent, explains Davis. But they have allowed schools to make real improvements in their efforts to reach kids vulnerable to hunger.

“The waivers gave meal providers the ability to reimagine traditional summer meal service,” says Davis. This has been especially helpful for families in rural areas, where transportation difficulties made it hard to get kids to school to get a meal in the summer.

These improvements need to continue, she argues: “Letting waivers expire so abruptly and with such extreme challenges remaining does nothing but pull the rug out from underneath schools and kids struggling with hunger.”

Long uncertain, young people’s access to abortion is more complicated than ever

Long uncertain, young people’s access to abortion is more complicated than ever

4 years after a school shooting in a small Texas city, ‘There is still a lot of pain’

August 13, 2022
Manage Cookie Consent
To provide the best experiences, we use technologies like cookies to store and/or access device information. Consenting to these technologies will allow us to process data such as browsing behavior or unique IDs on this site. Not consenting or withdrawing consent, may adversely affect certain features and functions.
Manage options Manage services Manage vendors Read more about these purposes
View preferences
{title} {title} {title}