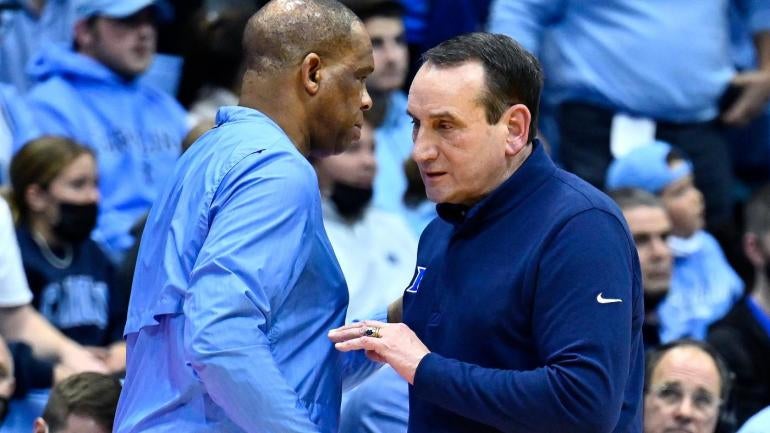 The stage is set for a legendary rivalry clash in the Final Four next Saturday as No. 2 seed Duke will take on its hated rival No. 8 seed North Carolina with a spot in the NCAA Tournament championship game on the line. It will be the 258th meeting between the Blue Devils and Tar Heels, but the first time they have played in the NCAA Tournament.

It marks the 13th Final Four appearance for Duke coach Mike Krzyzewski, who is set to retire at the end of the season, and an element of revenge will also be in play after the Tar Heels beat Duke 94-81 on March 5 in Coach K’s last home game. That victory helped UNC solidify its case for an at-large bid to the NCAA Tournament, and it evened the season series between the teams at a game apiece. For the Tar Heels, spoiling Krzyzewski’s going away party at Cameron Indoor Stadium was surely a memorable way to close the regular season. Now, they have a chance to end his career altogether.

A rubber match in the ACC Tournament looked possible before the Tar Heels lost to Virginia Tech in the semifinals, which seemed to erase the chance that the teams would play for a third time. But the rubber match is coming after all, and it will be on the sport’s biggest stage. Krzyzewski is 50-47 all-time against North Carolina, and his last game against the Tar Heels will be the most significant yet.

While it’s Krzyzewski’s last season, it’s the first for North Carolina coach Hubert Davis. After replacing the legendary Roy Williams, Davis has a chance to go down in history with a 2-1 record against Krzyzewski. Davis is a former UNC assistant and guard who played under the legendary Dean Smith from 1988-92. Smith finished with a 24-14 record against Krzyzewski, whose career has now touched the tenures of five North Carolina coaches.

The game will be a battle of two scorching hot offenses. Duke shot 70.8% from the floor in the second half of a Sweet 16 win over Texas Tech and followed up with a similarly dominant offensive performance against Arkansas in the Elite Eight. Both opponents entered lauded for their defense, and in both games the Blue Devils’ attack proved insurmountable.

North Carolina exploded for 95 points in a blowout victory over Marquette in the first round of the NCAA Tournament and then stayed hot in a 93-86 second round victory over defending national champion Baylor that took overtime. In a Sweet 16 win over UCLA, the Tar Heels got a legendary shooting performance from sophomore guard Caleb Love, who scored 27 of his 30 points in the second half. Then, in an Elite Eight win over Saint Peter’s, the Tar Heels simply dominated with size and athleticism.